DNA Painter’s Jonny Perl has added a new feature for exploring traits and medical DNA markers on his chromosome mapping tool. Explore which ancestors contributed what to your genetic makeup! 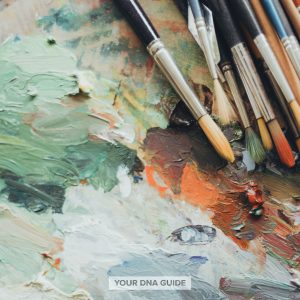 DNA Painter (www.DNAPainter.com) is a website that hosts some third-party tools for doing something a little extra with your DNA test results. One of those features is a chromosome map, where you can use the DNA you share with your cousins to figure out which piece of DNA you inherited from which of your ancestors. DNA Painter creator Jonny Perl has added something new to his chromosome map: the ability to see some traits that, according to scientific publications, are associated with particular places on your chromosomes.

“There are often many different genes in different locations that can be responsible for different characteristics and traits,” explains DNA Painter creator Jonny Perl in his recent announcement. “Only very rarely is it as clear-cut as we’d like it to be….As it stands, we can still infer some interesting information about our ancestors by reviewing traits carefully on our chromosome maps.”

Particularly interesting to those tracing their heritage, he says, “The method of viewing traits and medical SNPs [genetic bits] on your chromosome map could potentially be used to track specific conditions back in time.”

To implement this new feature, he had some help from Your DNA Guide’s own Christi Jacobsen, who chatted with Jonny about the news in his booth at RootsTech 2020:

Christi recalls that at RootsTech 2019, she heard someone in one of Jonny’s classes ask him about the ability to map traits to specific ancestors. “I knew this was possible—we just needed to identify the locations,” she says. “I went home and uploaded into DNA Painter the locations for early-onset Alzheimer’s, because that affects my husband’s family, and also the blood-type gene. I emailed him and said this was possible.”

Eventually, Jonny contacted her to ask for help choosing and adding additional relevant genetic markers, which Christi was happy to do. “I’ve got a degree in molecular biology and I’ve been utilizing SNPedia [a genetic wiki] in my own family. For the past two years or so, I’ve been running several family members’ DNA through Promethease and helping them understand what that says.”

Take it from here with DNA Painter:

Learn more about chromosome mapping with DNA Painter so you can start to see which genetic traits or medical SNPs are associated with particular ancestors. It’s fun and fascinating!