The best DNA test for Asian ancestry provides the most specific, accurate ethnicity results for those with Chinese, Japanese, Korean, Indian, Pakistani and other Asian roots. Here are your options and our top pick for DNA testing for Asian ethnicity.

What do I mean by “Finally?” Well, take a look at this Amazon review from 2018 written by an AncestryDNA customer: 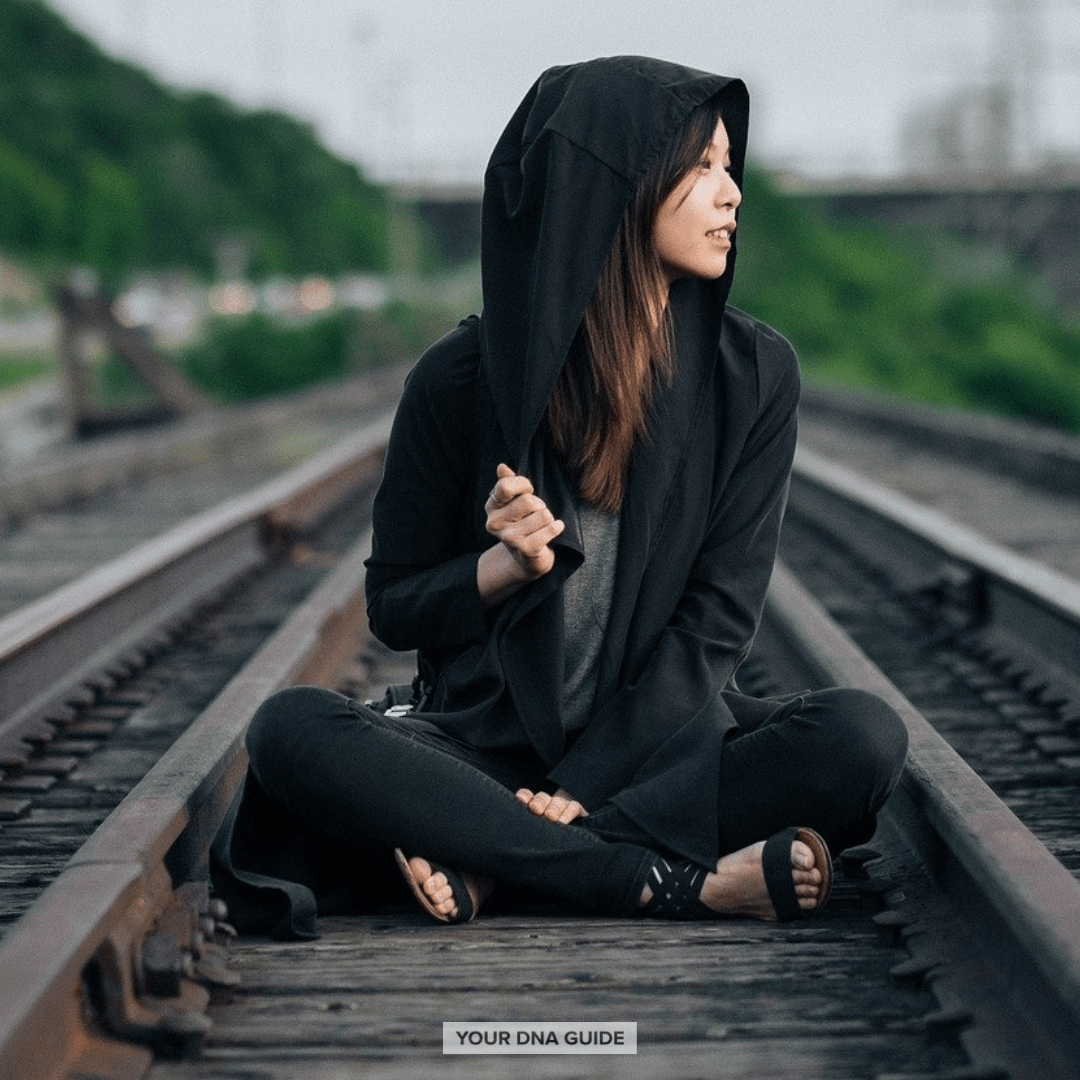 That’s rough. Let’s take a look at the report:

100% Asia East?? Duh. He already knew he was Asian. He probably should have used the money to buy a new pair of shoes or a nice dinner instead.

Best DNA test for Asian ancestry and ethnicity in 2022

The good news is, things have gotten much better for people of Asian descent who want to use DNA to learn more about their ethnicity. Established industry leaders are ramping up representation for these areas of the world. New companies in the global market are also tapping into this large under-served niche.

Before we tell you where to test, though–are you ready for DNA discoveries? Do you know what to expect with your results?

Be prepared. Download our free guide, “DNA Testing for Family History: What to Know Before You Test.”

Get Free Guide: What to Know Before You Test

Back to your question: what’s the best DNA test for Asian ancestry (ethnicity)? Here’s the short answer (the long answer is below). For those who want to explore their Asian ancestry through DNA testing, AncestryDNA* is the clear winner right now. They are the global leader with the most diverse and well-populated reference panel with 68,717 people with long family histories from 84 regions around the world. AncestryDNA has 6,477 reference samples just for Asian populations, which is more than some other competitors have to represent the entire world.

Click below to purchase your AncestryDNA test based on where you live. (Thanks for using our links–we get a small commission at no extra cost to you, and we put a lot of time into analyzing this question for you!) 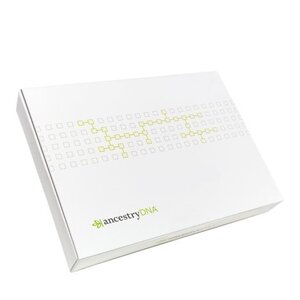 Now, that’s the short answer. But AncestryDNA isn’t the only DNA test kit that explores Asian origins. They all continue to progress, and some offer better options for different parts of Asia. We’ve kept a running commentary for 2020, 2021 and 2022. Read it all or jump to the 2022 summary.

First, let’s talk about what we mean by “Asian.” More than 2 billion people live in East Asia, an area that includes Siberia and Mongolia in the north, through China, Korea and Japan, and curving around south to the nations of Southeast Asia, Indonesia and the Philippines. And the story is similar for people with South and Central Asian ancestry coming from Pakistan, India, Nepal, Bangladesh and surrounding areas, the home to 20% of the world’s population.

Much of the development of ancestry genetics was piloted with European DNA. But Asian populations are deeply diverse and numerous, accounting for more worldwide genetic diversity than all of Europe put together.

A study published in the prestigious scientific journal Nature reported findings from over 1,700 Asian individuals, demonstrating at least 10 deep lineages that produced the various ancient Asian populations—with the equivalent of just one for all of Europe. 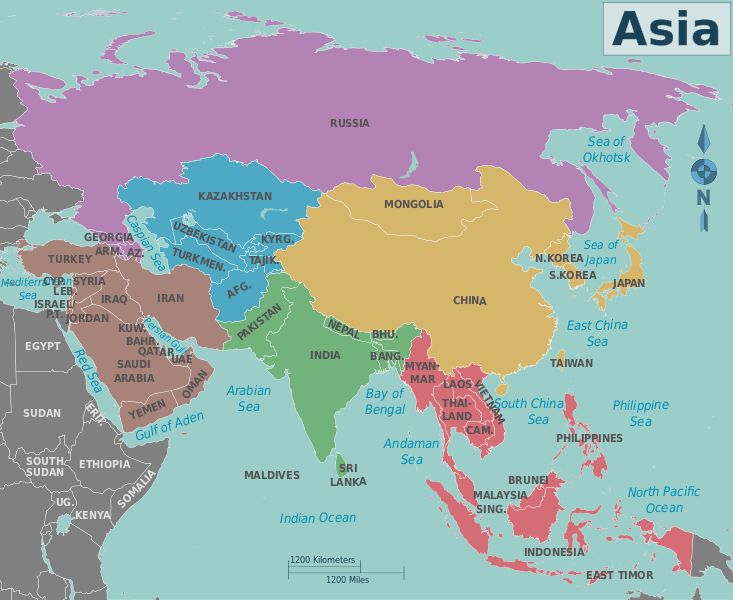 “Map of Asia” by Cacahuate, adapted by Peter Fitzgerald, Globe-trotter, Joelf, Texugo, Piet-c and Bennylin at Wikimedia Commons, CC BY-SA 4.0, no changes made.

2020: 23andMe has made big improvements in their ability to provide more granular ethnicity breakdowns for individuals from South and Central Asia. Previously, clients from these areas received an ancestry composition report that looked something like this:

This isn’t very helpful if you already know that you are a member of this large world population. Updated results based on a new version of South and Central Asian reference panels gives much greater granularity, with the potential to detect membership in seven new subgroups, as shown here:

That’s progress. And we can expect to see that this part of the world will gain even greater levels of detail as reference populations are expanded.

2020: Clients with interest in East Asia can also expect increased granularity with recent version updates from 23andMe, AncestryDNA and other companies. Although there is still much work to be done here, these companies have both recently expanded their reference panels to more specific populations in Southeast Asia: Chinese Dai, Vietnamese, Filipino, and Indonesian. Already existing reference populations in Japan, Korea, China, and Mongolia have been shored up with greater numbers in the most recent updates as well. Expanding their reference base in Asian populations continues to be a priority for these established companies, and clients can expect to see results with increasing granularity over time.

2021: More progress! Enhanced possibilities are here for those ready to dig into their Asian roots with the release of a significant update from AncestryDNA. Previously only a handful of broad regions were supported, but there’s a lot more to see here now. 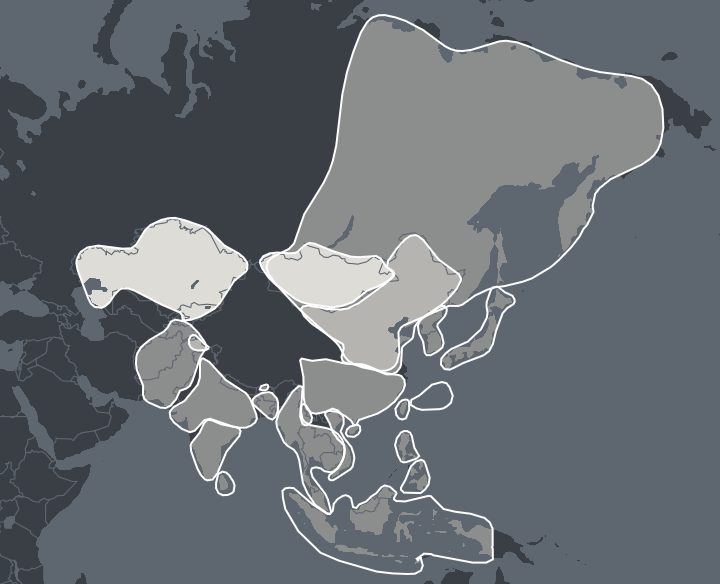 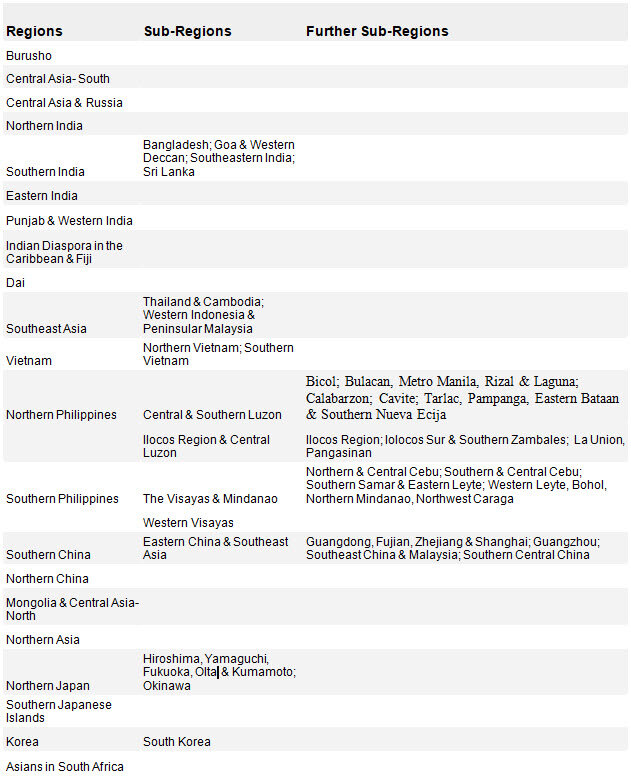 With the increased detail for Asian regions and genetic communities offered, clients can now query against an updated database that supports dozens of new populations. The genetic communities can be especially revealing, as they reveal specific migratory groups and places with which you and your DNA matches are all associated.

2021: As of early 2021, MyHeritage DNA* now reports the following Asian ethnicities: Central Asian; Chinese and Vietnamese; Filipino, Indonesian and Malay; Inuit; Japanese and Korean; Mizrahi Jewish—Iranian/Iraqi; Mongolian; Nepali; South Asian; Thai and Cambodian; and West Asian. Even more significant, they have identified a significant number of Asian Genetic Groups. MyHeritage’s Genetic Groups are ancestral locations (think migratory groups) that are likely found in your recent heritage in the last 400 years or so, based on your DNA matches. 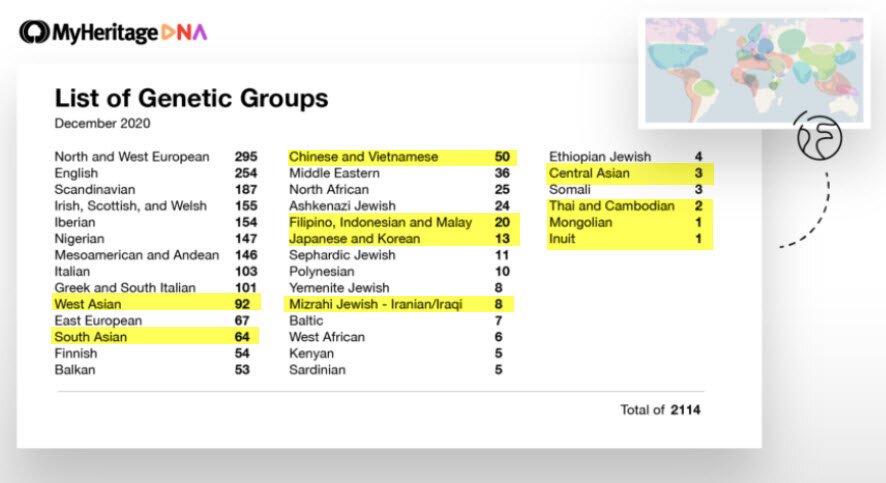 2020: In October 2020, Family Tree DNA expanded its ethnicity categories, including an upgrade from 6 to 33 categories in the Asia and Oceania region. These represent significant improvement! Family Tree DNA has a much smaller testing pool than Ancestry, 23andMe or MyHeritage, so your overall chance of finding DNA matches is smaller, but there are other reasons to consider testing with Family Tree DNA, such as their YDNA test and mtDNA test.

New genetic access opportunities for people of Asian descent are also developing with companies that are newcomers to the worldwide market.

Another significant update to the AncestryDNA reference panel has brought further resolution to the anciently rooted and diverse populations of Asia. While smaller in scope than the major update to Asian populations in 2021, four entirely new regions have been added (Central & Eastern China, Southwestern China, Nepal & the Himalayan Foothills, and Tibetan Peoples, see figure below). In previous versions of the database, people descending from these areas had been indistinguishable from larger groupings of broadly Asian people from sizeable surrounding areas. But now this heightened level of granularity is available to all AncestryDNA clients, strongly benefiting those that may have received a more general Asian ethnicity prediction previously, and may now find they have group membership in these more specific areas.

AncestryDNA has impressive numbers in their reference panel to back up these ethnicity predictions. Each of these new regions has several hundred samples that represent the population’s unique genetic profile, and in general a higher number of representative samples translates into greater ability to accurately assign clients querying the database (see table below). 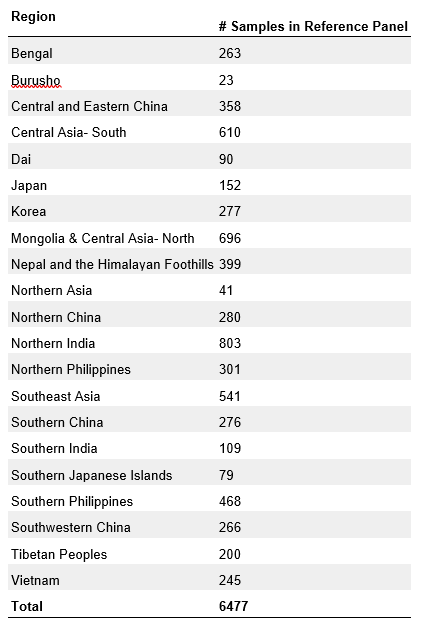 One area that is not well-surveyed in the AncestryDNA database at this point is a large region designated as Northern Asia. Currently there are only 41 samples that represent this extensive region, so this is a bit of a blind spot in the coverage that AncestryDNA has for Asia at this point. We are looking forward to future updates where there may be greater granularity available for this large region of the world.

In addition to the new Asian regions available with this update, three regions defined in previous database versions saw a significant increase in accuracy of assignment for beta users with long homogenous history in these areas (Central Asia South, Southeast Asia, and Southern India). AncestryDNA has published an interactive map where users can fully explore these updates and other regions covered by their newest reference panel. If you have ancestry in any of these places, it’s time to take another look at your ethnicity estimate to see if there are some new insights to explore. 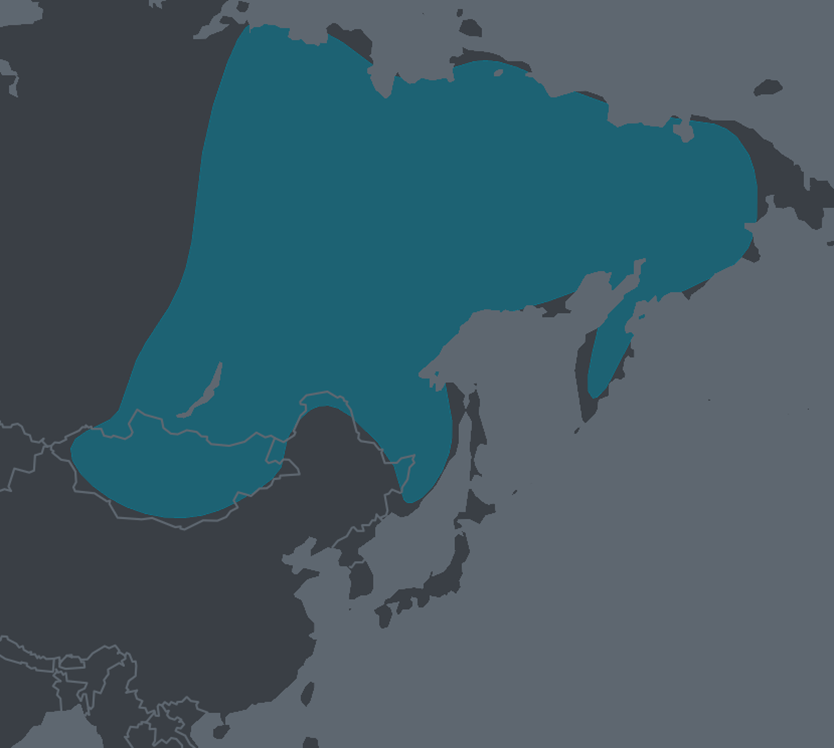 It’s also worth a look to check out the new offerings for increased resolution in China from 23andMe. The newest version of their database released in August 2022 expands the granularity available in China from three to five regions. The region previously known as just “China” is now split into three areas stratified across a north-south gradient: Northern Chinese & Tibetan, Southern Chinese & Taiwanese, and South Chinese. These newly identified populations are added to the pre-existing Central Asian and Dai groupings for a total of five separate regions in China.

The north-to-south separation of genetic populations shown here was also independently detected by a recent study led by BGI-Shenzhen in Guangdong, China, lending strong credibility to the trends reported by both groups. 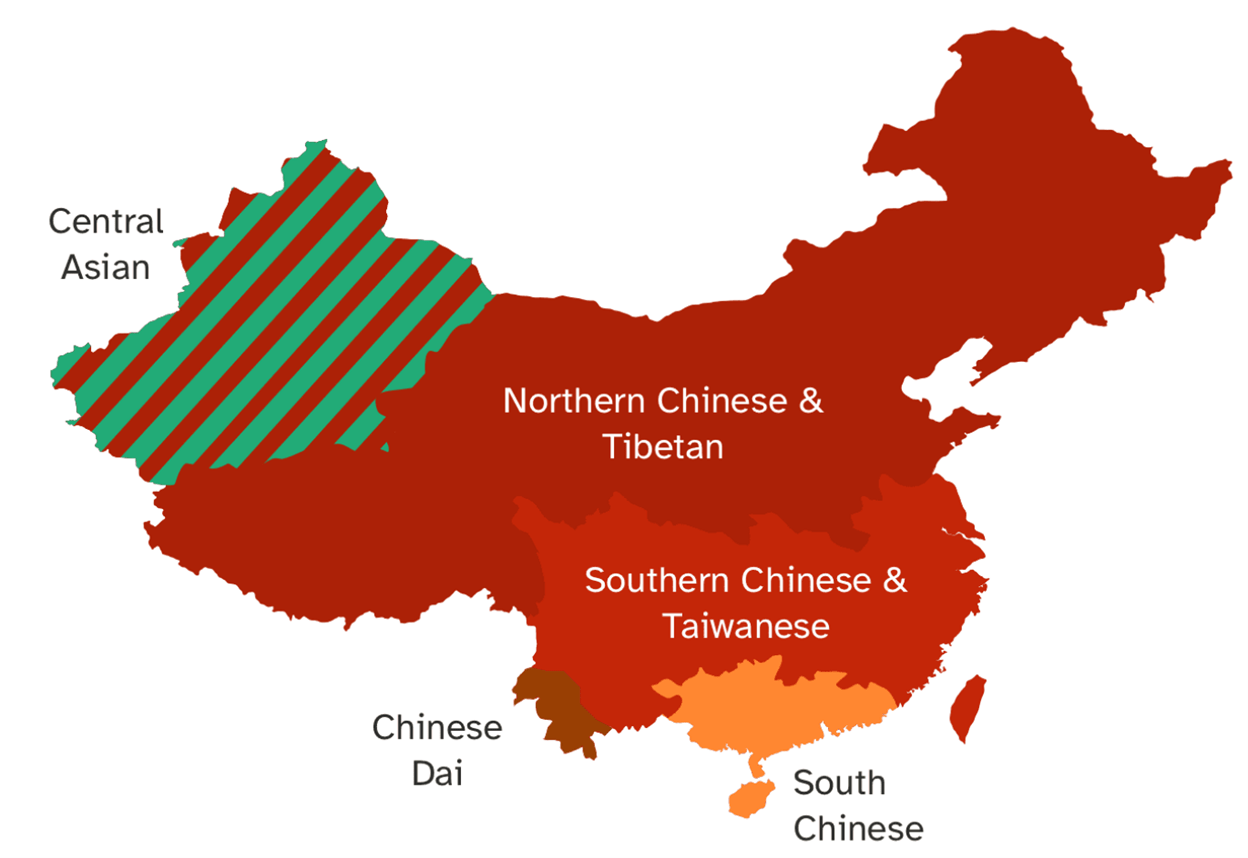 What To Do Next: Choose Your DNA Adventure

STEP 1: Be prepared. Get our free guide, “DNA Testing for Family History: What to Know Before You Test.”

Get Free Guide: What to Know Before You Test

STEP 2: If you decide you’re ready, get your DNA test: again, we recommend AncestryDNA. Your ethnicity results will automatically update as even better data becomes available! Again, thanks for using our links!