Heritage travel adventure! Mike took an old family photo to Sweden, hoping it would lead to his ancestral home. Thanks to genealogy serendipity, we had success. Now his Swedish ethnicity results are more meaningful and he can picture the past even more clearly.

Mike had one main goal in coming to Sweden: to see the house where his great grandmother, Carolina Petersdotter, was born on 20 April 1864. He had a picture of the house, taken about 1870. She had brought the photo with her from Sweden. Mike inherited the photo when his grandmother passed away. 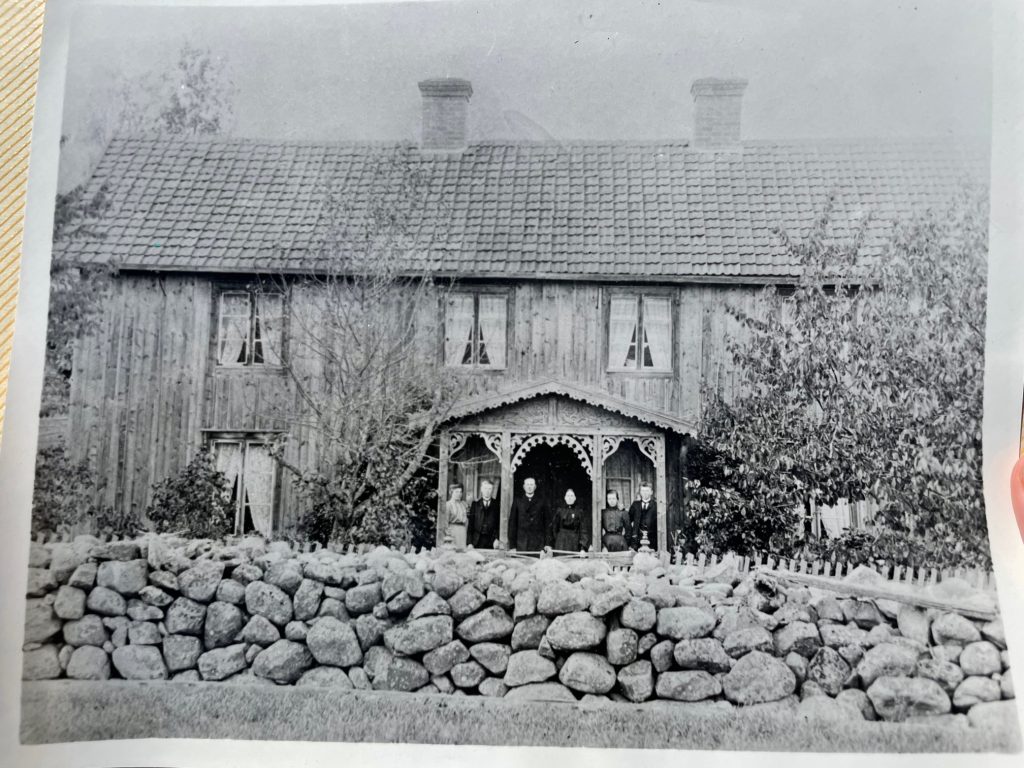 In the early 1980s, Mike sent a copy of the picture to the local newspaper in Ingatorp, Sweden, where his family was from. He enclosed a note requesting that anyone who recognized the home would write to him.

Someone did. Siwert Petersson, his second cousin once removed. (Mike’s great grandmother Carolina was the sister of Siwert’s grandfather Franz Gustav Patterson.) Siwert reported that “the letter in the newspaper made us very happy” and provided other interesting details about the picture and their shared family.

I got to go to Sweden with Mike, who is my father-in-law. When we finally arrived in Ingatorp, we wanted to find the house, or at least the property. The plan was to have lunch, then drive up and down the streets of the small town with the hopes we would recognize the house. We stopped for burgers and showed the proprietor the picture. She contacted a local expert who might know more. Bless her heart, Margareta Brahn Thorsson left her gardening to drive all the way into town to chat with us. She is a retired school teacher with short silver hair and piercing blue eyes and (thankfully) excellent English.

To our great disappointment, Margareta didn’t initially recognize the picture. She showed us a map and explained that Ingatorp is a large parish. Our house could be anywhere within its bounds. Then Mike pulled out the 40 year-old letter from Siwert. Guess what? Margareta knows Siwert! Of course she does. AND when we looked at the letter again, we realized the letter specifically said the house is in “Grimmstorp, Ingatorp.”

Upon reading the letter herself, Margareta’s face lit up: she knew where the home was. She picked up her phone and called one of two remaining farmers in the village of Grimmstorp, who promptly left his work in the field to come meet us at the house. (These people were so kind.)

Margareta drove us in her tiny car the few miles from Ingatorp to Grimmstorp. She told me all about the different farms and villages we passed, and inquired about our home and life in the U.S. Pulling off the road at the sign indicating Grimmstorp, we drove through what looked like a private drive between two barns, then turned left.

And there it was.

Upon comparing the picture with the real home, it seemed we had indeed found the home where my father-in-law’s great grandmother was born.

Later, Mike wrote me this note: “For the first 30 years of my life, my Swedish grandmother was alive and I adored her. Going to Sweden and seeing where her ancestors lived strengthened that connection. The sights, sounds and aromas of that beautiful land will remain with me always.”

I believe him. I’ve connected with the ancestral homeland of my own beloved grandmother. I didn’t even have to go to Italy in person! Read my story.