mtDNA testing is the neglected child of genetic genealogy. But mtDNA identified the remains of Jesse James. Could a similar strategy help your family history research? 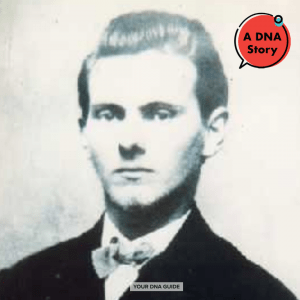 Most of us are interested to hear about the next best thing. But in our haste to adopt the latest and greatest, we might be neglecting some tried and true tools.

I feel like this has happened to mitochondrial DNA (mtDNA). MtDNA was actually the DNA that started it all: the DNA that led to the thriving genetic genealogy industry we have today. MtDNA is a child of the 60’s but really came of age in the 80’s when its full sequence of 16,569 letters was first identified. This DNA testing type then hit the full spotlight in 1996 when it was used to identify the remains of famous outlaw Jesse James.

In case you weren’t paying attention to genetic genealogy news in 1996 (or in the following years when related research was published and discussed), here’s a quick recap of the Jesse James case:

Jesse James was a famous outlaw in the United States who supposedly died in 1882—except that rumors persisted that his death was staged, and that the body buried under his name in a Nebraska cemetery wasn’t his. In 1995, his body was exhumed and DNA was recovered from two teeth (and from hair strands recovered from his original burial site).

Next up was getting a DNA sample from a known James relative and comparing all the samples. Here’s where mtDNA came in. Jesse had a sister, Susan, with whom he would have shared the exact same mtDNA signature they both received from their mother, Zerelda. As shown in the tree below (taken from this report in the Journal of Forensic Sciences, Susan had daughters for several generations, thus preserving her mtDNA, until the last in the line had a son, who also would have gotten that same mtDNA from his mom. 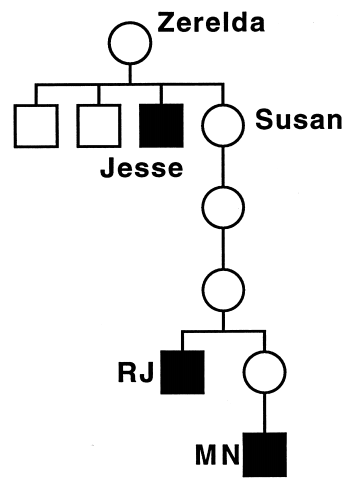 So that son took an mtDNA test. And guess what? His mtDNA was an exact match to the DNA samples pulled from the burial sites of Jesse James, meaning that those two individuals shared the same maternal lineage. As explained in the abstract below where this research was published, that’s about as close as it could get.

mtDNA analysis and your genealogy

You’re probably not exhuming ancestral remains as part of your genealogical investigation, but a similar strategy might be used to verify a hypothesized relationship between two individuals who are guessed to have the same maternal lineage. Just remember that the generations that connect the two people being tested should begin with a woman and descend through women, as the Jesse James descendant did (even though he himself was a man). Currently, you can only order an mtDNA test at www.FTDNA.com*.

If you have already taken an mtDNA test, or are planning on taking one, our mtDNA Quick Reference Guide is the perfect next step. It explains everything you need to know, and nothing more, about how to  start using mtDNA results to build your family tree.

Take me to that Quick Guide!