Y-DNA can reveal a Scottish clan connection! A researcher uses YDNA to trace her Canadian great grandfather’s origins, and finds much deeper roots in the MacDougall clan. (Oh, and some more recent connections, too.)

Margaret Clarke of British Columbia, Canada, set out to trace the lineage of her great grandfather. It led to some surprising places: first to the United States–and then, with the help of Y-DNA testing, a HUGE leap to the Scottish highlands and an ancient king. Thanks to Margaret for writing in to share her story with us!

“I have been searching in vain for the origins of my great grandfather Thomas David Clarke for decades,” she says. “Oh, I have had some very lucky breaks along the way. For instance, when I first started researching in the 1990’s, my local library had just received the 1901 Canadian census on microfilm days earlier. I had no idea how to find the family in the census, but I knew they had lived in Victoria, British Columbia so I chose one of those rolls and started looking.”

“Scrolling through the thousands of names, I soon realized that this was a hopeless task, so I hit the rewind button on the microfilm reader. At one point I stopped rewinding and looked at the screen, and couldn’t believe what I was seeing — the entire Clarke family was right in front of me, including my grandfather Charlie at age three! What a wonderful feeling to be able to show that census to my father. He did not know much about that side of his family, but that serendipitous discovery spurred us both on to find out as much as we could.”

The 1901 census is now searchable online. Image from FamilySearch.org; click to view.

“From that census, and other Canadian records, we learned that Thomas David (TD) was born in the United States around 1857,” Margaret continues. “Every record showed a different birthdate, and the few records that named a city all had different cities. It was always California though, so we focused our search there. We were able to find his wife’s records with no problem, including the 1870 census where she appears at six months old in a tiny California farming community.”

“Nothing definitive was ever found for TD stateside, however. We have never found a marriage certificate. His obituary does not mention his parents, just that he was ‘a native of California.’ The death certificate at the time of his passing did not even have a place to record parents’ names! It was as if TD did not exist before arriving in Canada in the late 1880’s, at least under that name.” 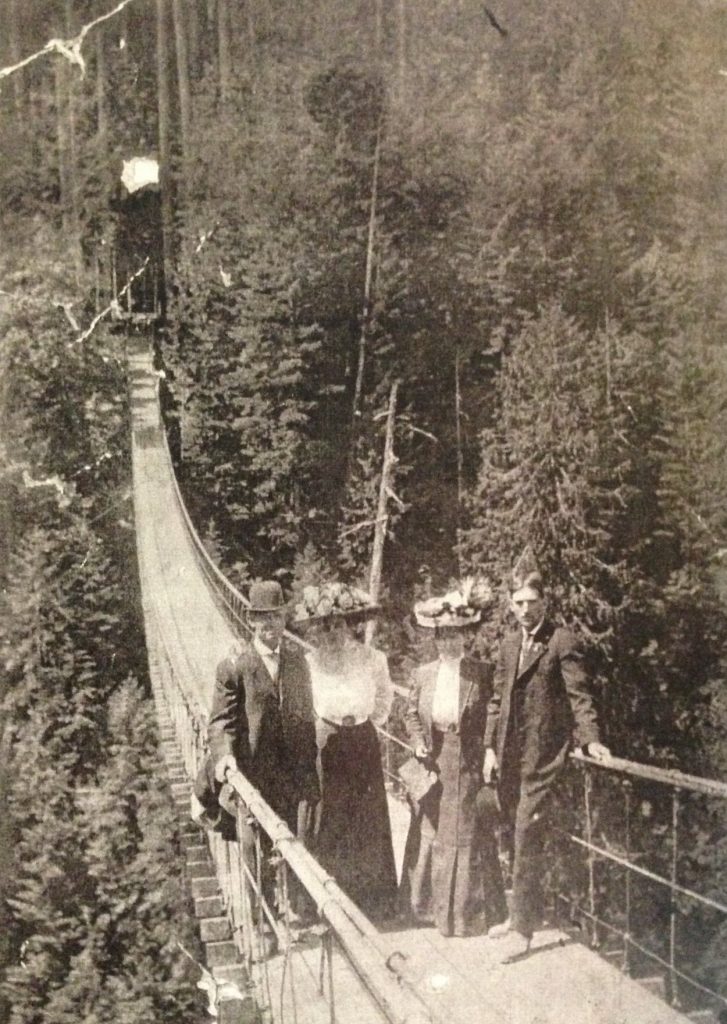 The only photo Margaret has of her great grandfather. Taken around 1900 on the Capilano Suspension Bridge in British Columbia. Left to right: Thomas David Clarke (in the hat), his daughter Alice, wife Ida, and son Allan.

“Eventually my father passed away without knowing anything about his Clarke great grandparents,” writes Margaret. “Luckily, however, we had made contact with a cousin who had also been researching the family history for years, and that cousin agreed to take a YDNA test. I thought that would give us the answer to this mystery, but instead it just raised more questions. Most of my cousin’s matches had the surname Macdonald, and the closest family was located in the southern U.S. states of Tennessee and Georgia — with their own brick wall mystery ancestor!”

“I joined the Macdonald Surname Project at that time, and the project administrator told me that my cousin was definitely a descendant of Somerled [the ancient Scottish warrior king] but would need more testing. I did not know what further tests were needed but I knew they were expensive, so I held off and focused on autosomal DNA results. Interesting as it was to be connected to an ancient warrior king, I really just wanted to find my 2X great grandparents!”

“Fast forward six years to 2021,” she continues. “Sadly, my cousin had since passed away, but his YDNA test suddenly began to get new matches, all with variations of the surname Macdougall. Every month there seemed to be new Macdougall matches, but I still didn’t know how to interpret the results. Then I learned that Diahan Southard was offering a YDNA course, and I signed up, eager to solve this mystery once and for all.” 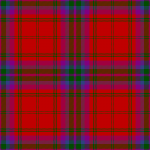 MacDougall tartan, as published in 1842 in the Vestiarium Scoticum. Image by Celtus – Own work, CC BY-SA 2.5; click to view.

“Looking at the YDNA results with fresh eyes, I followed Diahan’s advice to explore surname projects, and decided to join the Macdougall project. Jackpot! I learned from the project administrator that all the closest matches to my cousin’s test share a unique  YDNA marker of Somerled’s son Dougal, the progenitor of the Clan Macdougall. This rare YDNA signature had just been discovered in 2020 by researchers at the University of Strathclyde, and the Clan Macdougall Society was eagerly pursuing more testing (which explained the sudden influx of new Macdougall matches, all at the Big Y level). A news article at the time of the discovery states that there were only twenty men known to share this marker.”

“To my surprise, the project administrators asked if I would be willing to let them upgrade our test from 67 markers to the Big Y test at the Clan Macdougall Society’s expense, to further their research. I felt like I had won the DNA lottery! Not only did following that one tip save me almost exactly the cost of the YDNA course, more importantly it will provide so much more information about where my family fits in with our matches. The best part is that, thanks to Diahan’s YDNA course, I now have the knowledge and resources to be able to understand the [Big Y] results when they arrive.”

“Oh, and that 2X great grandparent? Following another tip from the course, I have already found a YDNA match that also matches my family’s autosomal DNA, so I am closer than ever to solving this mystery. I think my dad would be thrilled!”

Thanks again for sharing your story, Margaret! In case you’re interested, Margaret took our popular YDNA Course. We offer a free mini-course introduction to YDNA, too.

Take a FREE Mini-Course about YDNA