Using YDNA for genealogy can help solve many mysteries on your paternal lines! Read how Linda and Toni used what they learned in the YDNA for Genealogy course to help them answer their question: who was Mordecai Hance’s father?

Who was Mordecai Hance’s father? Linda Richards had been trying to answer this question since 1972 when she first began her genealogy research.

In 2016 Linda received an email from Toni Shelton, a DNA match. Linda and Toni are second cousins once removed through the Hance family line. Toni had her own question she wanted answered: who was her biological father? After two years of sleuthing, the two had uncovered the answer.

Mordecai Hance was born in 1828, most likely in South Carolina, and died in 1889 in Jackson County, Tennessee. Toni and Linda know about his life from 1850 onward, including when and whom he married and his children. But they have yet to find information on Mordecai before he shows up in Washington County, Tennessee in the 1850 census.

Autosomal DNA had already helped them solve one problem, so they figured they could use YDNA for genealogy, too: to help them solve the question of Mordecai Hance.

They asked Toni’s half uncle (Linda’s first cousin twice removed) if he would do a YDNA test for them in June 2019. His results came back with two matches, but neither of the men had the Hance surname and they were seven and eight steps genetic distance apart. Linda notes that the results only raised more questions.

“These matches had the surname Whelchel, which we had never heard or seen before,” she says.

The next logical step was to look at all of Linda and Toni’s family members who had tested their autosomal DNA to see if they could find the Whelchel surname. They did find hundreds of matches to Whelchels, but they could not discover how Mordecai Hance was associated with them.

Both Linda and Toni then knew that they would need more men in the Hance family to take YDNA tests. They were able to test three more cousins, one each descended from Mordecai’s other sons (Mordecai had five sons; one of them had only daughters). While Linda didn’t think it was necessary, they decided to test these cousins at 111 markers in the hopes for “better results.” They were curious what 111 markers would tell them.

All four of the Hance men matched each other and the two Whelchel men they discovered from Toni’s half uncle’s results. Linda noted that the two Hance men that are second cousins once removed or second cousins twice removed have genetic distances of 2, 4, or 6. They had expected a genetic distance of zero, but they know the genealogy is correct. Linda assumes the line has rapidly changing STR markers.

Still without answers, Linda and Toni continued to target-test and create a Whelchel/Welchel of VA/SC/GA surname project at Family Tree DNA. Through their surname project, they were able to find seven Whelchel men willing to test.

Francis Marion Whelchel, the immigrant ancestor these men shared, was born in 1720 and had five sons. The family tree is a tangled web, as they all had large families, repeatedly used the same names, and frequently married cousins. Toni and Linda knew that Mordecai Hance fit in the family tree somewhere, but they weren’t initially sure where.

Both Toni and Linda participated in Diahan’s YDNA for Genealogy Fall 2021 course. They both attest that the tools provided in this class have been an amazing help to their Mordecai Hance mystery.

“Once we had test results, we knew we had a perfect match between one Whelchel tester and one of our Hance testers!” Linda explains.

She extracted the YDNA results from the surname project into a spreadsheet. From that spreadsheet, Linda then extracted the markers where there were differences between the testers so that she could easily see them for comparison.

From the information in the chart shown below, we can group these men to show how they are related by drawing a cladogram (which they learned how to do in the YDNA course). 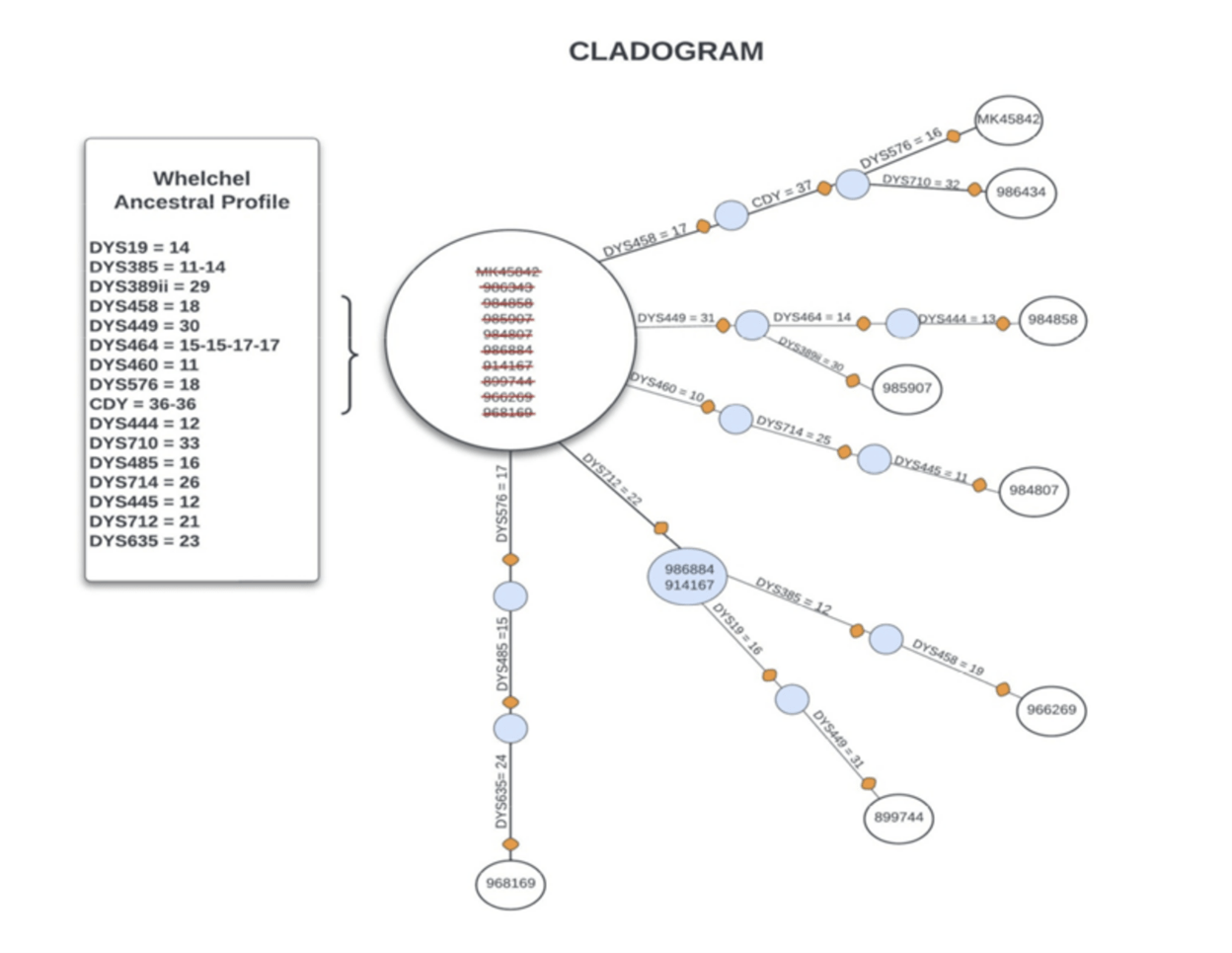 After looking at these results and drawing out a descendant chart, Toni and Linda believe that Mordecai Hance is the son of Francis “Frank” Whelchel, born in 1790 in Union County, South Carolina. Mordecai would be a great-grandson to Francis Marion Whelchel, the immigrant ancestor. 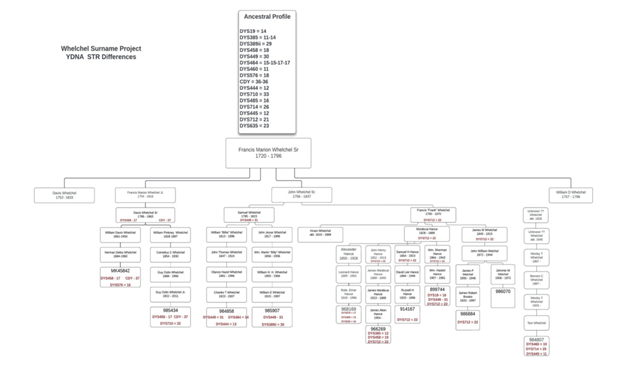 The genealogy fits. The genetics fit. The geography fits. And though they’ll be on the lookout for any further evidence that may support or conflict with their finding, they’re satisfied with this sleuthing for now.

“Diahan has been an invaluable DNA guide through all of this with the classes, webinars and coaching she offers!” Linda says.

Thanks for the credit–but congratulations are most due to Linda and Toni: two (female!) descendants much further down the family tree who eventually figured it out! Who says YDNA is only for men?

Do you have your own paternal line mystery that YDNA may be able to help solve? The YDNA for Genealogy Course can help!

Enroll in the YDNA for Genealogy Course