A longtime genealogy brick wall gets busted when DNA sheds new light on “the case of the mystery countess.”

Janis has been interested in family history since she was just a kid, “rummaging around in my grandparents’ attic and spending way too much time looking at old photo albums.” But one particular mystery caught her attention early on. 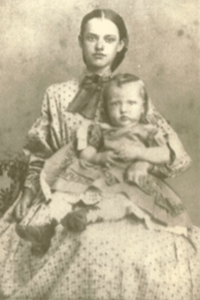 “An old family tale said that Caroline married a German count while the royal family was touring America,” Janis continues. “Caroline returned with her husband and the ‘royals’ to Germany, where a child was born. After a time, preparations were made for the count and his young family to return to America. According to family lore, Caroline was brought to the ship about to embark, but her husband and child were delayed. She was persuaded by her ladies-in-waiting to get on board, assured that her husband and child would take the next ship. She did so, and she never heard from or saw her husband or child again.”

Intrigued, Janis set out to find out about Caroline.

“I began my research using the usual document sources, but had trouble finding a complete picture,” recalls Janis.”  Employing traditional genealogical research methods, Janis pieced together a timeline for Caroline using census records to build a family tree. Her research indicated Caroline was born in Herkimer, NY, in 1855, but lived most of her life in Morris, Illinois. “Caroline disappeared after the 1870 census, and I couldn’t find her until 1900 when she was back in Morris, living with her family but using the surname Ferber. I couldn’t find a marriage record or any other census records, and I was totally frustrated.”

Janis continued to search for Caroline periodically, never giving up hope of finding answers. One day she ran a simple Google search. A priceless clue surfaced: “Pastor Wilhelm Willing’s Diarium Pastorale,” posted by the Society of German Genealogy of Eastern Europe. “My exact hit was on a marriage record for Julius Von Ferber, who listed as his parents Ernst Von Ferber and Caroline Dietrich!  I was re-energized to continue searching for Caroline.”

A great deal of genealogical research ensued. Janis reports, “I finally managed to piece together Ernst Von Ferber’s life and family AFTER he and Caroline split up. If, of course, I had the correct Ernst Von Ferber.”

Most of this research happened before Janis got interested in DNA. “When I did take a DNA test, I was pretty overwhelmed by the DNA test results,” she says. “Tons of cousins, and I couldn’t make sense of much of it.”

She wondered how she was related to all these DNA Matches. But one match eventually stood out—and shed new light on Caroline’s mysterious life. “Because I had done work on Caroline’s son and his family, I finally recognized a match surname: AL, [who is] a descendant of Caroline and Ernst’s son, Julius.”

Connection made! There are still questions about exactly what happened between Caroline and Ernst and why Caroline apparently had no contact with Julius after she and Ernst parted ways. Answers may surface someday, but Janis is satisfied to have discovered the origins of the story.

The only disappointment? Ernst turned out not to be a count after all. Just a man who apparently was well-heeled enough for some world travel.

For now, Janis has turned her attention to other family mysteries, like Rosalie Müller, another great grand aunt who disappeared after her marriage in 1873. “Haven’t found that DNA match yet, but I’m building networks, splitting them, and looking for possible 3rd cousins there.”

Learn DNA For Yourself

Janis learned these techniques (and others!) from Diahan Southard in the Your DNA Guide Academy DNA Skills Workshop. We have a slew of other resources to get you started learning techniques to track down your own mystery ancestors and relatives. A great place to get started is our Finding an Ancestor Quick Guide. With this to-the-point guide, you’ll learn the process to find you ancestors in bite-sized steps.