Lisa Porter has been an avid genealogist since she was a young mom in the early 1990s. She’d find herself sitting amidst much-older patrons at the Family History Library, where instead of searching for her pre-schooler’s puzzle pieces, she was searching for the missing puzzle pieces of her family history. 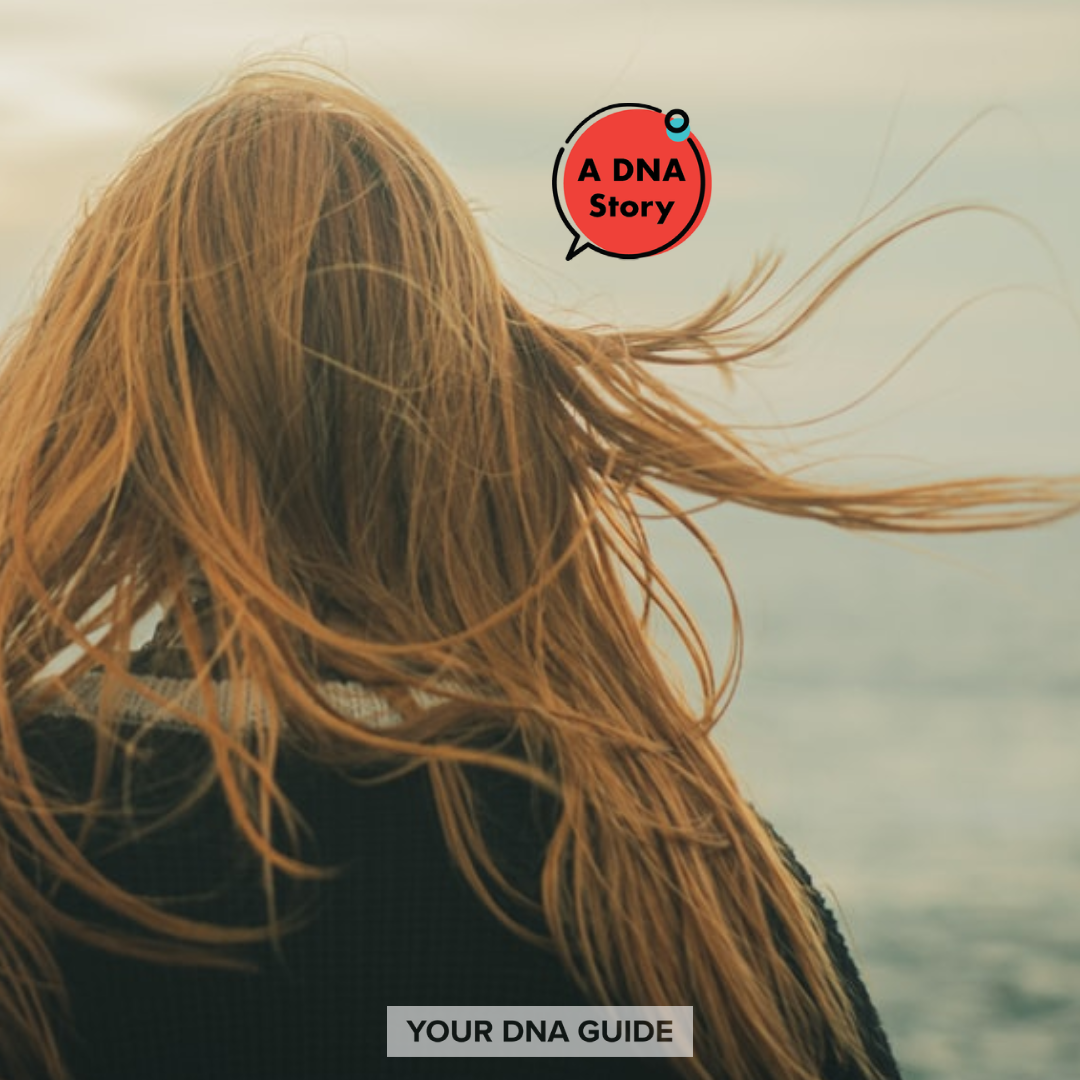 Since that time–despite hundreds of hours spent with records, online research and DNA results—Lisa could not answer one longstanding “brick wall” question: “Who was my grandmother’s biological mother?” And then on January 15, 2019, in a Your DNA Guide mentoring session, Diahan Southard made a suggestion that “broke the whole thing open.”

“Before becoming interested in genealogy, the only thing I knew was that Grandma had often told a story about seeing a woman on the train in Chicago one day who said, ’Do you know me? I’m your mother,’ and that Grandma had been adopted by her paternal aunt and uncle after her mother left the family,” says Lisa. “There really wasn’t a lot of information.”

Using traditional research methods, Lisa had found a Crown Point, Indiana, marriage license for her great-grandfather, Arthur Hessell, and a woman named Margaret Henderson. On the license, Margaret stated that she was 19 at the time of her marriage, hinting that her birth year was about 1885. No other information was provided.

One other document had piqued Lisa’s curiosity, so she had held onto it for more than 20 years, despite not knowing how (or whether) it fit into her family tree. In the 1990s, Lisa had sent for a copy of the death certificate for her 2x great grandmother (Arthur’s mother), but mistakenly received a death certificate for a toddler named Olivia Helen Hessell. 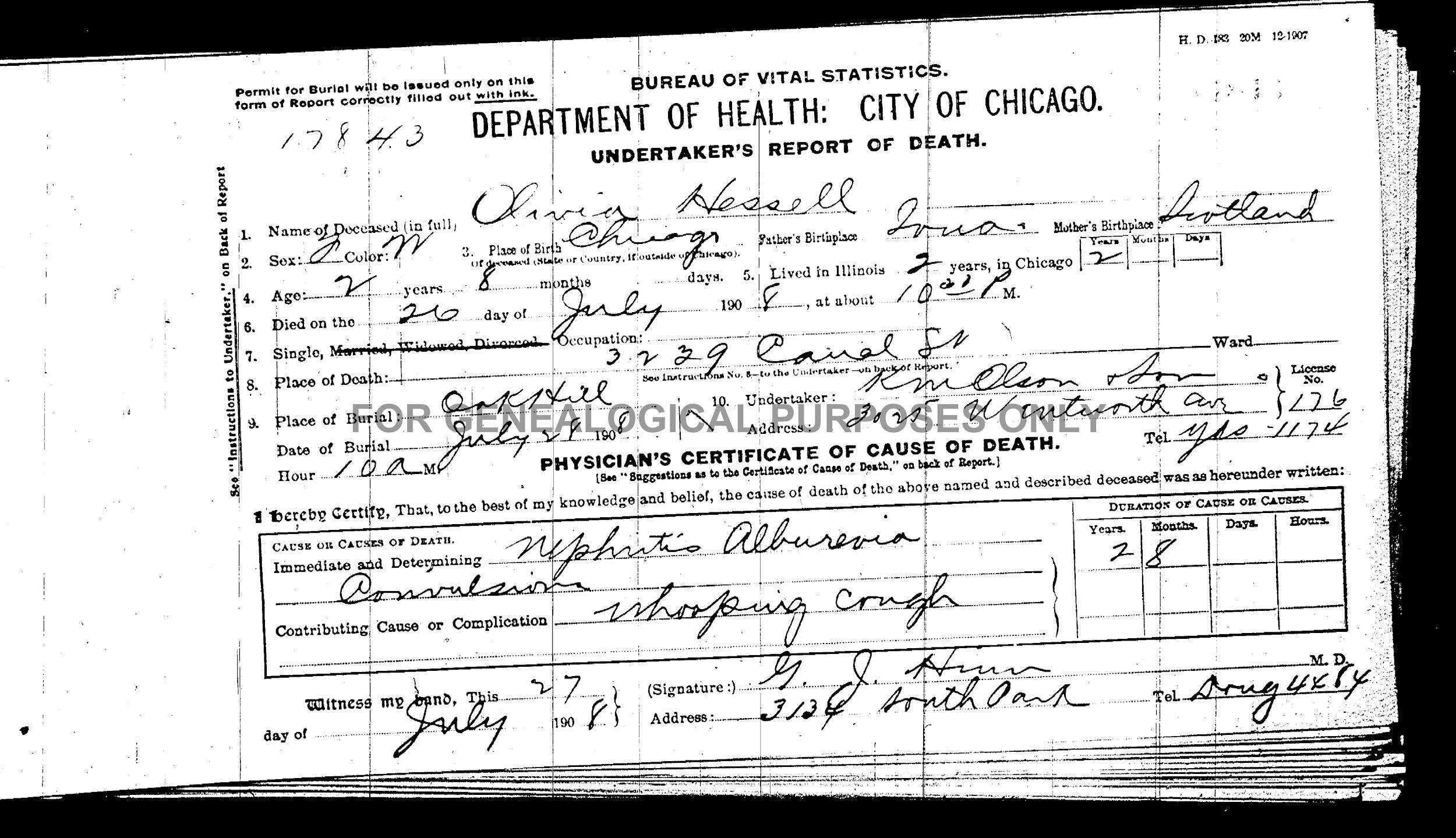 The child’s parents weren’t named, but their birth locations were noted. “It said, ‘Father’s birthplace: Iowa. Mother’s birthplace: Scotland.’ I held onto the certificate because it seemed likely that baby Olivia was somehow related to my Hessell ancestors, given the relatively uncommon surname and the fact that Arthur Hessell and one of his brothers had been born in Iowa in the right era.”

That was it. That was all that Lisa knew about her great grandmother. “For nearly 30 years, I found almost nothing about Margaret Henderson,” recalls Lisa. But she never gave up.

DNA Testing for a Mystery Ancestor

About five years ago, Lisa took a DNA test. “Genetic genealogy provided a chance to revisit the mysterious Margaret Henderson Hessell,” explains Lisa. She knew that having additional relatives test would help, too. To try to answer the question of her great-grandmother’s identity, she knew she had to be strategic in who she was having take DNA tests. 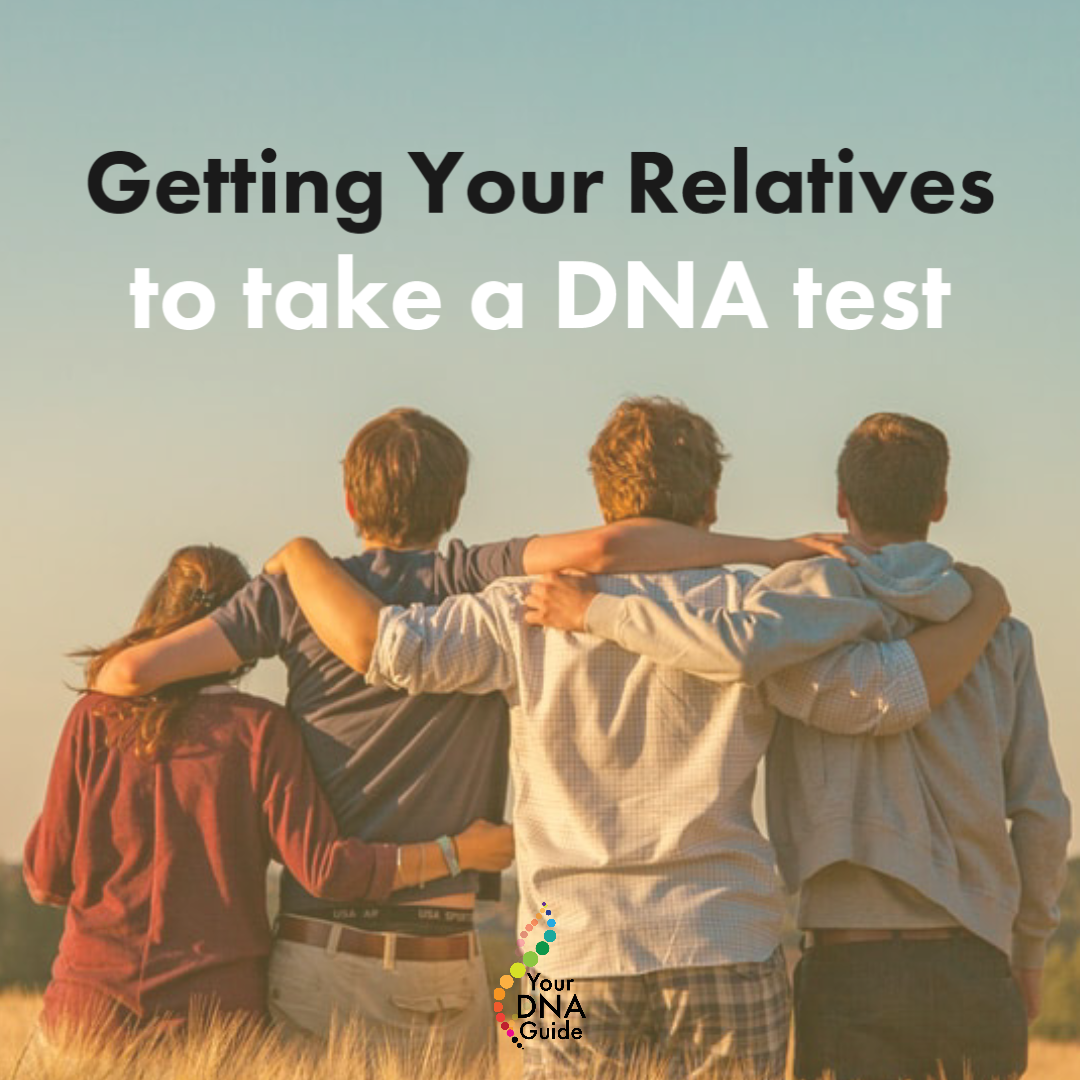 Unfortunately, by the time DNA came along, testing an older generation, as Your DNA Guide Diahan Southard recommends, wasn’t an option for Lisa. “My grandmother had died, as had my dad and his only brother.” Lisa was able to convince her first cousins on her dad’s side to take a DNA test.

Lisa returned to traditional genealogical methods for evidence to support or disprove the connection. Despite extensive research, sadly, Lisa was unable to find “Margaret Balmain Henderson” coming into the US, nor could she find her in any Chicago records.

She didn’t stop there. “I knew that I needed a ‘negative control group’ so I tested several 2nd and 3rd cousins who are descended from my grandmother’s Hessell (paternal) side, not her Henderson (maternal) side. I also asked three descendants of my grandmother’s paternal half siblings to test.”

Next came the work. Mining through all the DNA match lists to find the “gems” took some time. Lisa eventually found her diamond in the rough. There was “literally only ONE match (‘SC’) who fit the criteria to possibly be related to me via the Henderson line without matching anyone in another line,” recalls Lisa. Luckily, when she reached out to that DNA match, SC agreed to share her quite large tree and to upload her DNA results to GEDmatch.

A one-to-one GEDmatch analysis of the chunks of shared DNA between Lisa and SC, in conjunction with a search of SC’s family tree, highlighted “an ancestor of interest.” SC’s tree included a woman named Margaret Balmain Henderson, who was born in Scotland within 5 years of Lisa’s Margaret Henderson!

“That was the situation before calling Diahan Southard at Your DNA Guide,” recalls Lisa. Lisa set up a DNA Mentoring session with her, during which Diahan would review her research progress and advise her on next steps (or missteps).

Just prior to calling Diahan, Lisa and her cousins found an early 1900s photo of a baby girl in the attic of their grandparents’ home. “In handwriting resembling my grandmother’s, it looked like it said, ‘my darling sister, Olivia,’” recalls Lisa. “This was the first indication that my great-grandparents might have had a child before my grandmother.” The note on the photo spurred Lisa to take another look at the long-saved toddler death certificate for Olivia Helen Hessell, whose mother was born in Scotland. 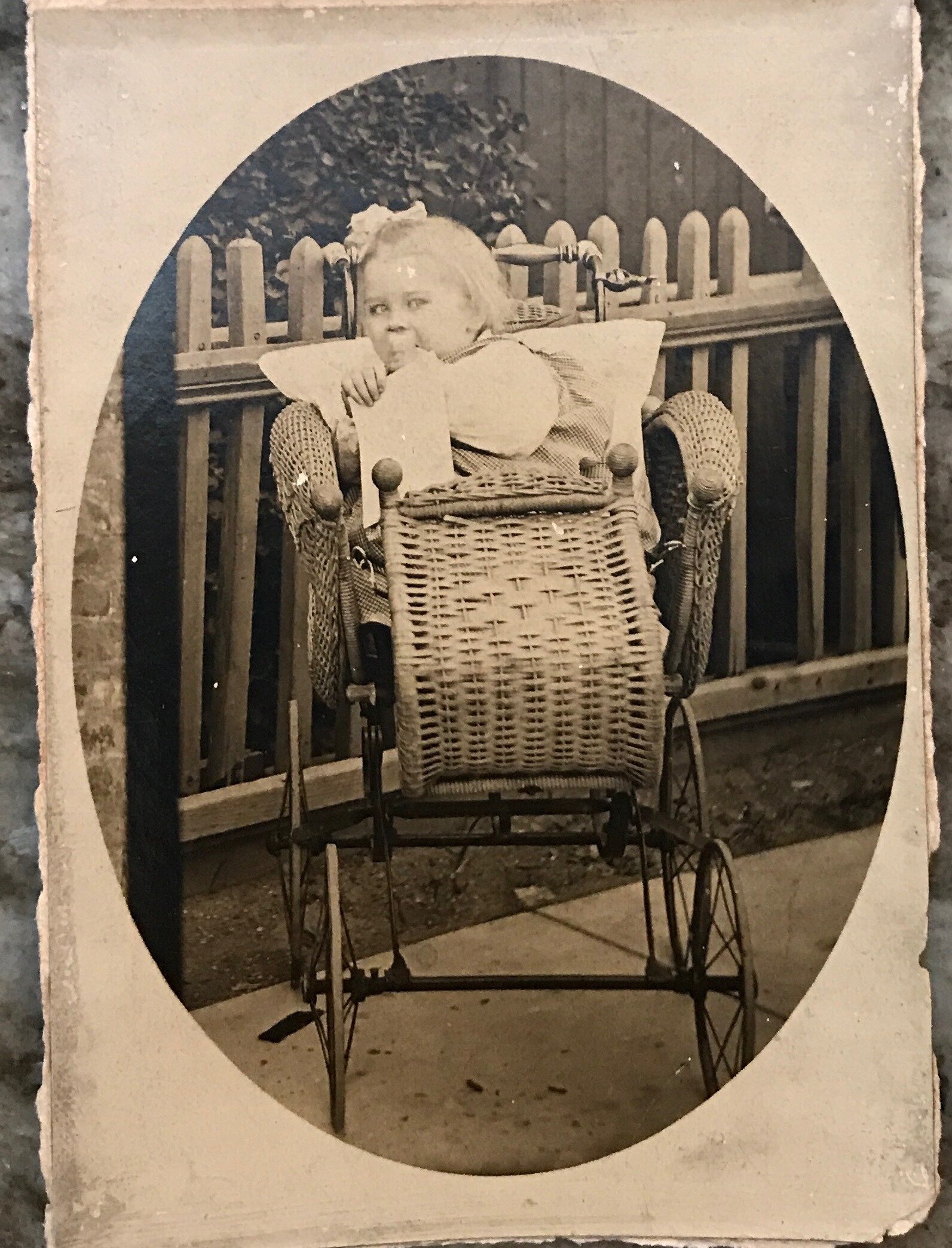 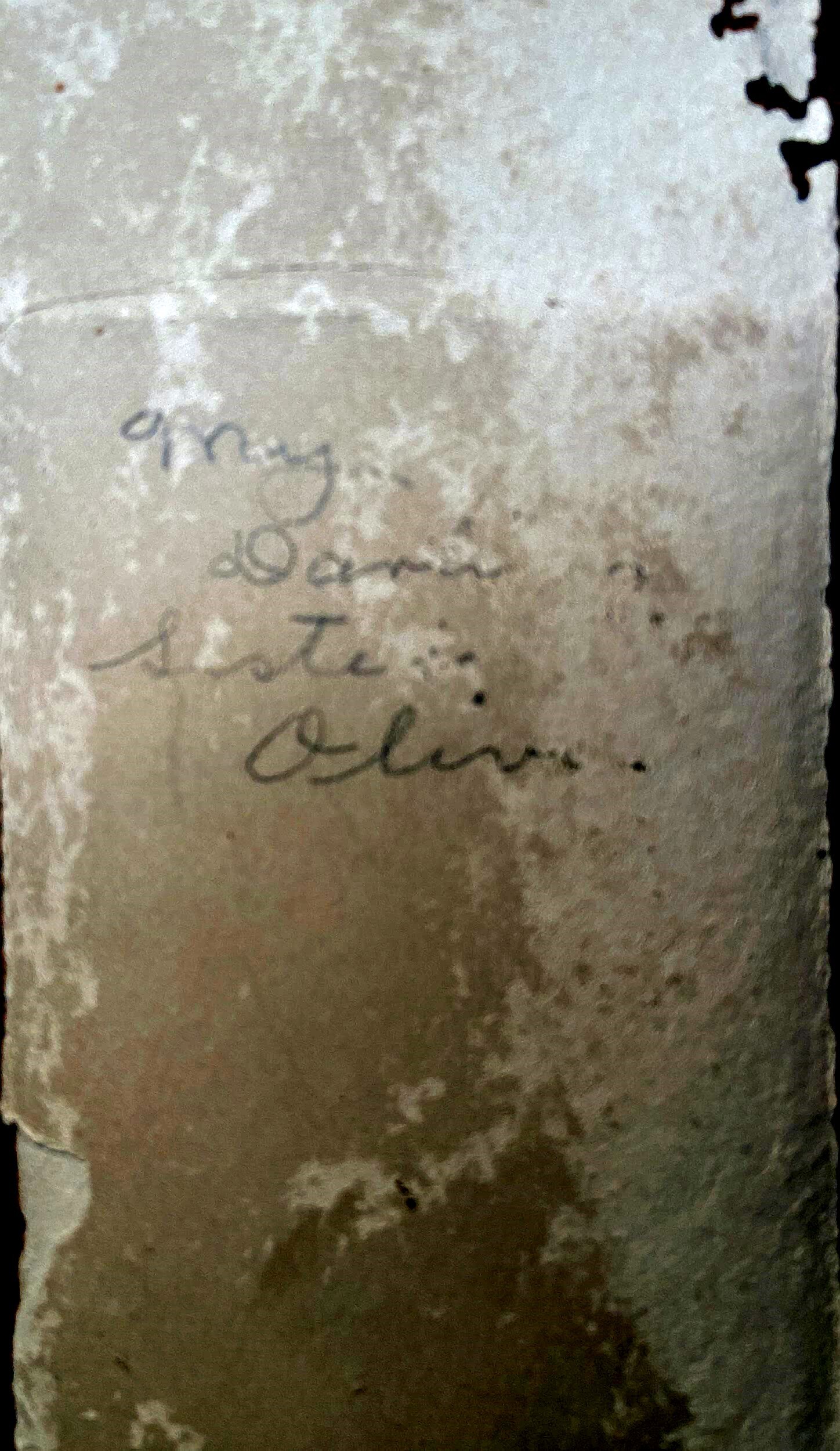 Back of an early 1900’s photograph, which reads “My Darling Sister, Olivia.”

The idea here was to hypothesize and explore a theory. Afterall, as Diahan likes to say, science is about best guesses!

So, following Diahan’s instructions, Lisa added Margaret Balmain Henderson to her tree as her hypothetical great-grandmother. Diahan advised adding Margaret’s parents’ generation as well, and told her to build out the tree coming toward the present (including siblings and cousins in each generation) to see if she could find common DNA or tree matches.

Each time a tree with similar names and locations was discovered, Lisa checked for shared DNA with all of the tree owner’s DNA kits. “When I didn’t find any obvious answers after adding Margaret Balmain Henderson’s parents’ generation, I went back another generation and added Margaret’s grandparents, too. Soon, descendants of three of Margaret Balmain Henderson’s aunts and uncles — Ann Fleming Henderson (SC’s ancestor), Helen Will Henderson and Alexander Henderson — started showing up in multiple trees as DNA matches,” explains Lisa.

Lisa also discovered a large tree that seemed to tie all of the lines together. But the tree owner, who lived in England, had not taken a DNA test. When Lisa contacted her, she agreed to do so, and a test was sent out to her. This strategy is known as targeted DNA testing, where you find the living descendants of the family to whom you think you are connected and ask them to take a DNA test.

While she waited for the results of the targeted DNA test, Lisa again dug into traditional paper records looking for Margaret Balmain Henderson. She eventually found her living with her parents and an older sister, Helen Hay Henderson, in the 1891 Scotland census. 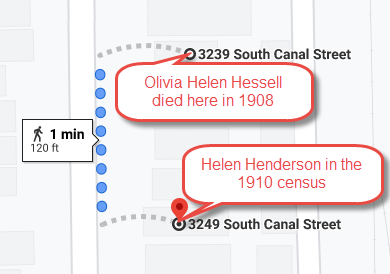 Despite not finding documentation of the family emigrating to the US, Lisa found a Chicago marriage record for Helen H. Henderson, and subsequently discovered something curious. “Helen and family were enumerated at 3249 S. Canal Street in Chicago in the 1910 Federal Census. This was intriguing because the 1908 death certificate for my grandmother’s possible sister, Olivia Helen Hessell, showed her address as 3239 S. Canal Street at the time of her death,” making this another “coincidence” Lisa couldn’t ignore.

A few weeks later, the DNA results from the kit sent to England came back as a match to Lisa and to SC.  “At that point,” describes Lisa, “I had 5 solid Henderson-related DNA matches indicating that my great grandmother was very likely Margaret Balmain Henderson, born 15 SEP 1887 in Dundee, Angus, Scotland.

Lisa built a family tree using the What Are the Odds? tool at DNA Painter to plot common matches with SC and the other descendants’ matches found on her Henderson trees. They show how consistently all her DNA matches fit genetically with the proposed genealogy. 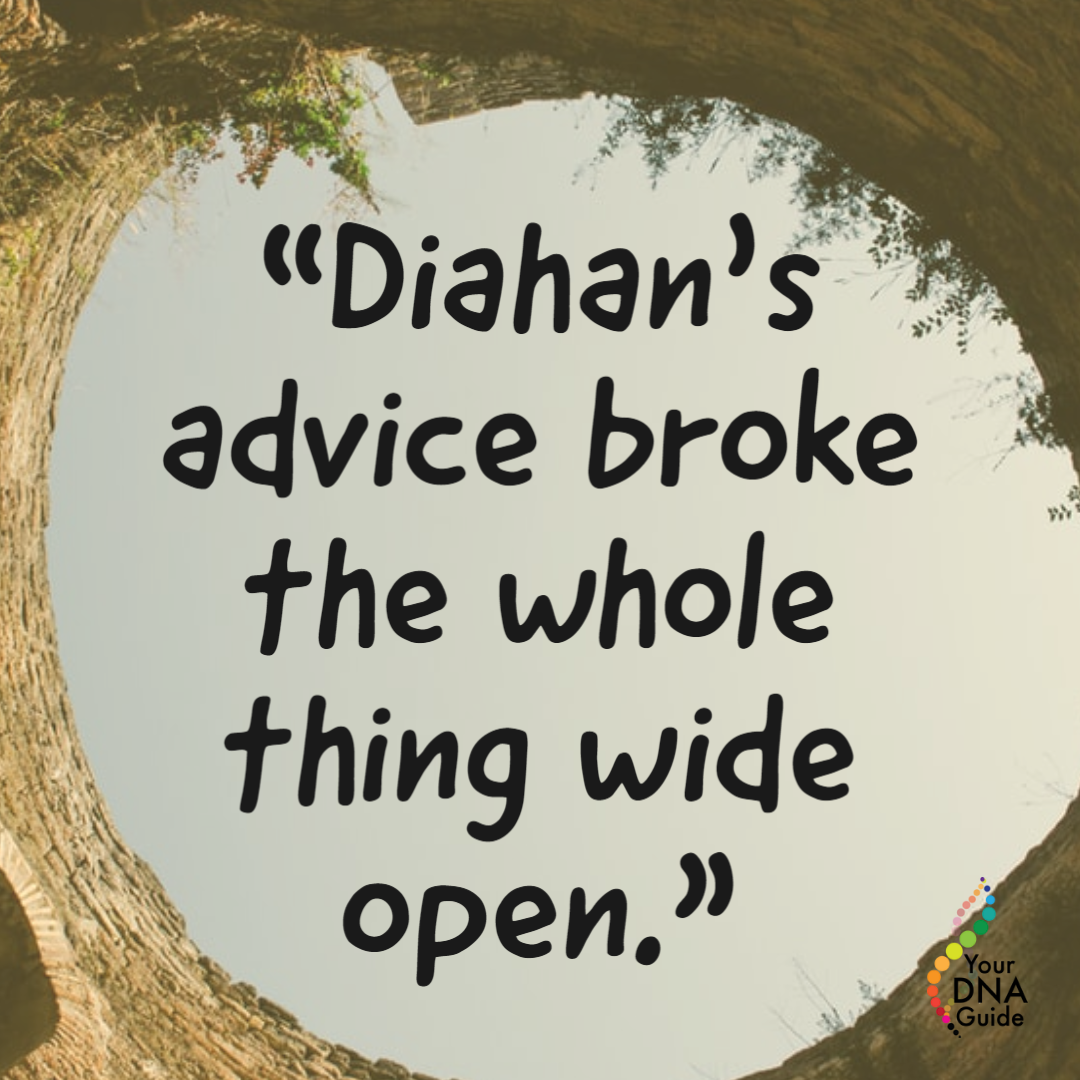 “One consultation with Diahan helped me break down a nearly 30 year old brick wall in just a few short weeks,” says Lisa. “Diahan’s advice broke the whole thing wide open. She was laser-focused in her advice, giving me a clear step-by-step plan to implement. It took a combination of traditional tree building, DNA matches found using Diahan’s advice, a lot of curiosity, and a bit of luck to break through, but her advice provided the catalyst I needed to find the answer to my genealogical question.”

Thank you, Lisa for sharing your story.

Get some Expert DNA Advice

It’s your turn to start learning and progressing, like Lisa did! If you have a brick wall ancestor somewhere on your tree, then we have just the thing to help you start knocking it down; check out our free guide on finding your ancestors.