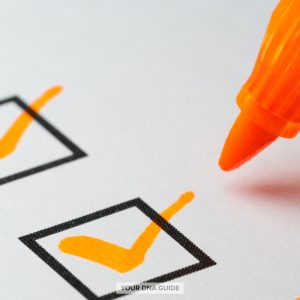 I was all ready to post a less-than-favorable GEDmatch blog post (below) when my faith in humanity (and GEDmatch) was restored. Thank you, Curtis Rogers and GEDmatch for doing the right thing in issuing an opt-in policy for the use of GEDmatch in law enforcement. This is a huge step forward in the right direction. NOW the new GEDmatch Terms of Service give YOU the choice whether to have your DNA matched to samples submitted by criminal investigations.

Here are the new circumstances under which criminal investigators may submit DNA samples to GEDmatch (screenshot from their Terms of Service on May 20, 2019):

And here are your options for how your DNA sample may be used: 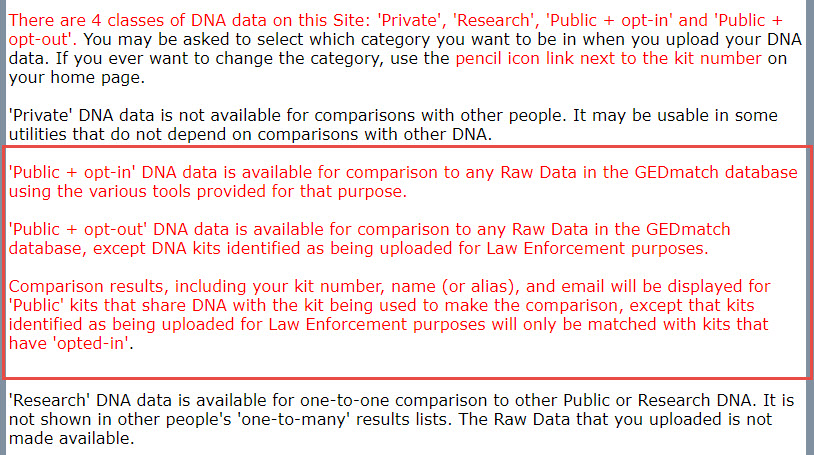 A note to the law enforcement community: Please, BE PATIENT. Don’t head straight to your judge to get a search warrant and jeopardize the use of this powerful tool. Just wait. Have faith in us as a community: many will likely rise to the occasion to become citizen detectives.

Here’s what I’d written about the GEDmatch situation before the above news broke:

I was at a get-to-know you mixer and in addition to a name tag, we were asked to wear a “strength” tag. We were supposed to come up with something we thought we did well. On my tag I put “Assumes the best.” And I do. I always try to think the best of situations and people, and it usually works.

But sometimes things happen that make it difficult to see the situation in a positive light.

I find myself in that place this week. It happened when GEDmatch violoated our trust as a community and broke their Terms of Service when they allowed a query of GEDmatch to investigate a violent assault as reported by BuzzFeed.

When I read this with my assumes the best attitude, I can see why GEDmatch co-founder Curtis Rogers told an enterprising detective that he could use GEDmatch to search for a relative of a perpetrator that violently assaulted an elderly woman. The detective did his due diligence, as he read the Terms of Service at GEDmatch that clearly state that law enforcement has to be in pursuit of a murderer or a rapist. But he wanted to stop this guy from hurting anyone else in his small community. So he reached out to Curtis with a plea for help. And Curtis answered that plea in a way that he felt would best serve that small Utah community who had experienced the crime. He opened the GEDmatch database, which led to an arrest.

Of course, this is not where this story begins.

It begins last year when GEDmatch was first used to provide the lead that helped solve the Golden State Killer case in California. Following the announcement, the Terms of Service at GEDmatch were changed, and anyone in the database with an email address was notified that law enforcement was now using GEDmatch to provide leads on homicide and sexual assault cases.

But it hasn’t stopped at GEDmatch. In January, Buzzfeed revealed that our oldest standing genetic genealogy testing company, Family Tree DNA, had violated its Terms and Conditions by not informing its customers of its decision to allow law enforcement to use its database. They later updated their policy, but still opted-in all of their US customers into the service.

This is not ok

The use of GEDmatch and Family Tree DNA in law enforcement has created a divide in the genetic genealogy community. Let me be clear: I don’t know anyone who doesn’t want to stop a criminal from committing another sexual assault, or to see justice served to someone who has taken the life of another. Of course we all want that. But the second we decide that anything is worth the violation of the privacy and security of any citizen, is the second we have given up too much.

After careful consideration and talking with my colleagues, I have come to disagree with the use of GEDmatch for law enforcement based solely on the fact that not everyone in the database has consented to that use. I hear persuasive arguments that technically the use of GEDmatch and FTDNA is legal, as they have crossed all of their legal t’s and dotted all of their legal i’s.

The words of Judy Russell in last week’s NGS lecture on ethics is ringing loudly in my ears at this point. She said, “Just because it is legal, doesn’t make it ethical.” But this boundary between legal and ethical can sometimes be so murky that it is difficult to know where we stand or what to do.

But this? This decision of GEDmatch and FTDNA to move forward to assist law enforcement without telling us? This is wrong. It is a blatant violation of an agreement that I made with GEDmatch and Family Tree DNA.

There is a better solution out there. There is a way that we can use genetic genealogy technology to become citizen detectives to help bring closure to hurting families and justice to those who have harmed them. But there is a right way. A best way. An ethical way. As my good friend Blaine Bettinger says, “The end does not justify the means.”

Many of us in the genetic community are making our voices heard with these testing companies. I hope that if you agree that these companies shouldn’t violate their Terms of Service, you’ll tell them so, too. As someone who still likes to assume the best of people (and companies), I hope this will lead to swift and meaningful change.

Here at Your DNA Guide our goal is to teach you the skills you need in order to DO the DNA yourself. We have a host of resources compiled to help you along every step of your genetic genealogy journey. Get started with our free Guide, What you need to know about DNA testing.