From DNA Match to Family Reunion

I just got invited to a family reunion by a DNA match! Here’s how to find fellow descendants of common ancestors on your DNA match list. (Whether to invite them to a party, sight-unseen, is up to you.)

You never know who you’re going to meet in your DNA match list. Distant cousins from long-disconnected branches. Surprise matches from close branches. A cousin you remember vaguely from a family reunion.

This week, I meet a third cousin, Robert. Here’s the message he sent me: 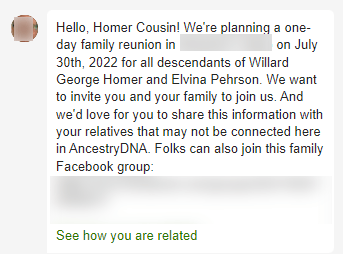 What a practical way to reach out to descendants on a VERY large family tree! That ancestral couple—my 2x great grandparents—had 10 children. My great grandmother had eight children, and so did her daughter, my grandmother. I’ve recently taken an interest in this branch of my family. So even if I can’t make it to the reunion, I was pleased to be invited to the family Facebook group, which is hopping with comments!

How did he know how we were related?

We matched at AncestryDNA, where we have both posted solid trees back to this ancestral couple. When I click on this match (or he clicks on me), we can see how our trees intersect, since Ancestry compares them for us: 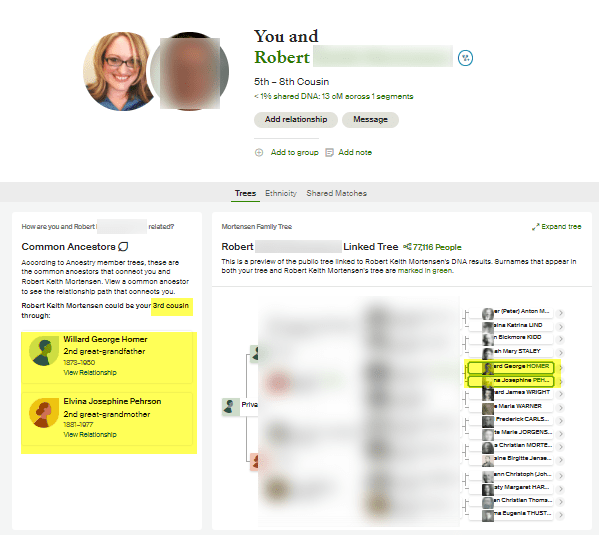 Interestingly, Robert and I only share 13cM of DNA, which is typical of a more distant connection. It’s possible our genealogical relationship is different than third cousins. But with a well-documented paper trail, it’s also likely we’re just seeing evidence of how randomly DNA can be passed down (or not) through the generations. Robert shares nearly three times as much DNA with my dad (38cM), which is a nice remainder that testing older generations gives you closer genetic connections to work with.

Finding other descendants of a common ancestor

When Robert went looking for DNA matches who shared his descent from Willard and Elvina, he probably didn’t click on each individual match. The fastest way to find AncestryDNA matches who document descent from a shared couple is by using ThruLines. Under the DNA tab, select ThruLines. When I do this, I can scroll down to a list of my 2x great grandparents. Rolling over Willard’s name, I can see that 34 of my matches have trees showing descent from him. Rolling over Elvina’s name shows the same number, but it could differ if either of them had descendants through a different partner:

When I click on Willard or Elvina, ThruLines shows me a descendancy tree that’s been reconstructed from data in linked, public trees of my various matches. It neatly distributes my matches among eight of their descendants:

I can click on the highlighted text to open a detailed view for additional matches.

Let’s pause for a second. I want to acknowledge JUST how powerful this tool can be for reconstructing match relationships.

Now, here are some caveats:

If I were Robert, and wanted to find even more descendants among my AncestryDNA matches, I would try a few additional strategies:

At a certain distance on your tree, you’re going to run out of matches. AncestryDNA doesn’t put anyone on your match list with whom you share less than 8cM. And it’s possible you don’t share ANY DNA with up to half of your actual 4th cousins. Here’s why:

Your DNA match list also won’t find non-biological cousins (such as adoptees), who might also want to know about the reunion.

To find more descendants on Ancestry, switch over from the DNA tab to the Search tab and select Public Trees. A search for Elvina Pehrson, born 1881 in Arhaus, Denmark shows nearly 400 tree results. A lot of those tree owners probably don’t have direct descent from Elvina and Willard. But you could certainly wade through them. (Click on profiles of tree members, and Ancestry will tell you if they’re on your DNA match list.)

Of course, even searching Public Trees only brings up people on Ancestry whose trees show descent. So I definitely appreciate Robert’s smart strategy: ask his matches to be in touch with their relatives who aren’t on his match list. Word of mouth is still powerful!

There are risks of reaching out to unknown DNA matches with an invitation to an in-person event (or responding to one). Not everyone will want to do that. Gathering everyone in a virtual environment, like the Facebook group Robert organized, provides a venue where invitees can interact, get updates, and decide whether to attend in-person. Thanks, Robert, for reaching out, and for giving permission for me to share your idea!

Free guide to using your DNA matches for genealogy

Now that we’ve shown you a strategy for traveling DOWN your family tree with your DNA matches, what about going UP your tree? Get our free guide to using DNA to identify unknown ancestors.