Document your DNA discoveries with research logs, spreadsheets and more! This methodology improves your confidence, efficiency and accuracy in genetic genealogy. 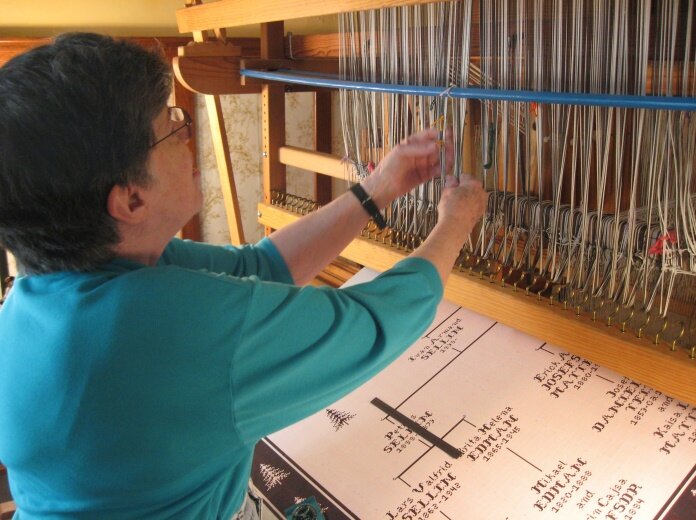 Meet Helen, a biochemist. She also loves genealogy and weaving, which have something in common. They both involve a pattern that brings together disparate threads into something beautiful.

As a recent student in Diahan Southard’s DNA Skills Workshop, Helen learned the importance of tracking her DNA research process using logs, charts and other types of documentation. 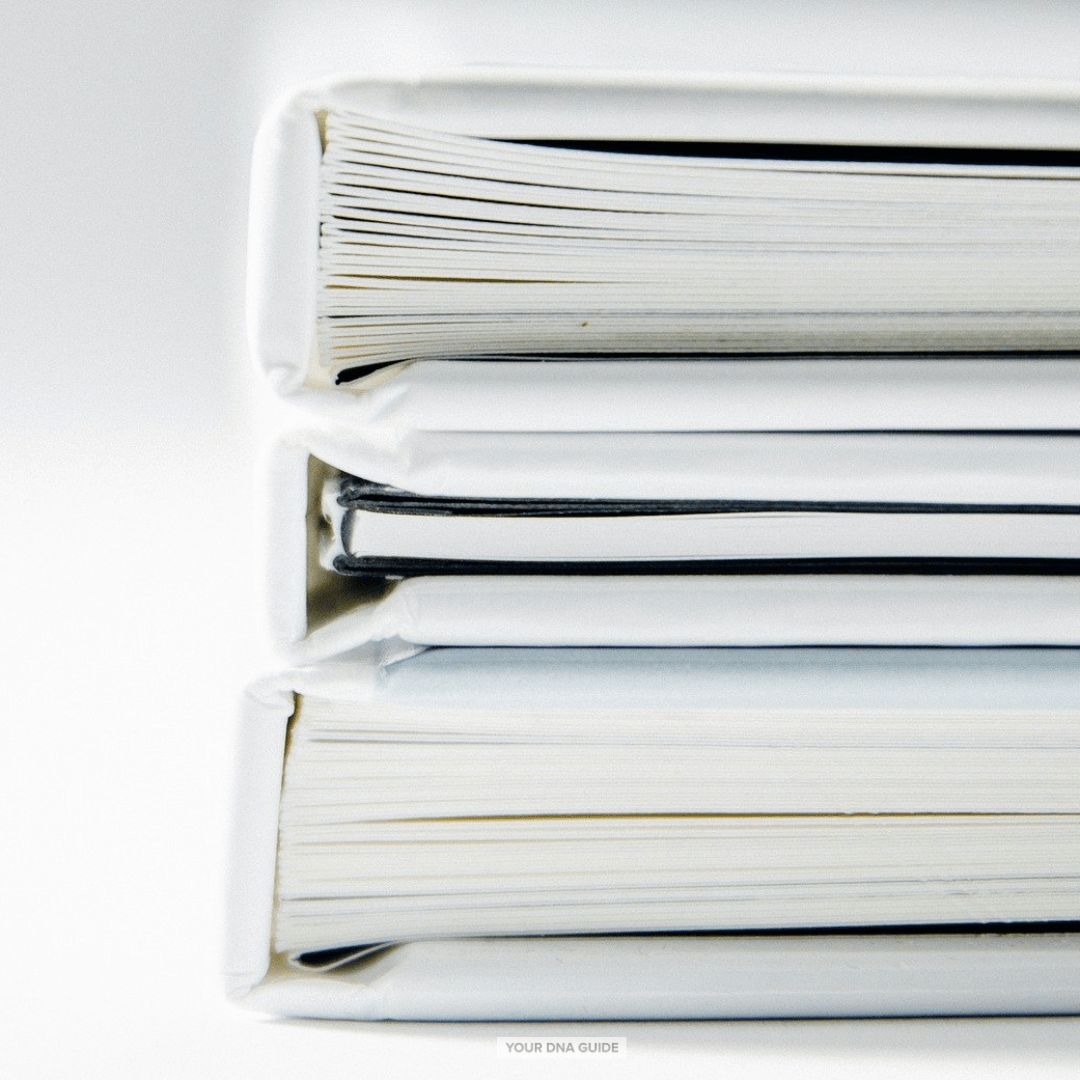 Documenting her research process gives her a map of sorts, not unlike the pattern she follows when weaving a textile. At any point along her way, she can look back and see where she has been, why she took the turns she did in her research process, and where it has brought her.

As a scientist, Helen has had experience with keeping research logs. But “it wasn’t easy and I didn’t enjoy that part of research,” she admits. That attitude carried over into her early genealogy life. Helen was researching her 1X great grandparents’ family, the Stephensons, who had six daughters.

“Finding married names for all those girls was a challenge!” remembers Helen.  One night, after a late-night research session, she finally made a huge breakthrough. But she didn’t keep a research log. She doesn’t remember the reasoning or evidence that led her to this conclusion.

So it’s significant that Helen’s biggest takeaway from the recent DNA Skills Workshop was “having a process to follow and understanding the interpretations and the advantages of keeping a research log.” In the Workshop, students learn to begin the course with a specific research goal, and to record the entire discovery process in research logs.

(In fact, a research log is part of the DNA Skills Workshop materials and the process is integrated into the coursework. You can create your own paper trail in spreadsheets, Evernote, One Note, Lucid Chart, or even a simple word-processing document. More important is the content. Write down the matches you analyze. Document your genetic networks.) But now, back to Helen’s story.

Branches of Helen’s family continue to have mysteries. “My family has very few ‘cousins’ and many of those of the same generation are 30-50 years older, thus dead,” says Helen. “DNA testing has been a challenge—finding participants to test to support my research theories.” Large age gaps between marriage partners have also made it difficult to identify the generation of connection with some matches.

Her known first cousin and her deceased brother are her only close DNA matches. Helen has, however, identified a Mystery Match, Barbara (not her real name), who is 94 years old. Her first cousin appeared to be a generation younger than Barbara. (Helen was not able to confirm the generation of connection between them.) Helen corresponded with Barbara and Barbara’s son, who manages her DNA test results, and eventually received permission to access Barbara’s tree data and DNA test. She has pored over these as well as Barbara’s ThruLines. One of her discoveries was a match with whom she has been trying to determine the most recent common ancestor.

Helen made the chart below, showing her relationships to some of her other DNA matches (her method is similar to the Leeds Method we describe here). In this chart, all of her shared matches with Barbara appear as sharing DNA with Barbara, of course (in the purple dot column). And then some of them also share with other matches: RPG, AK, JG, etc. This visual and organizational tool can be a great component of your overall DNA research documentation. 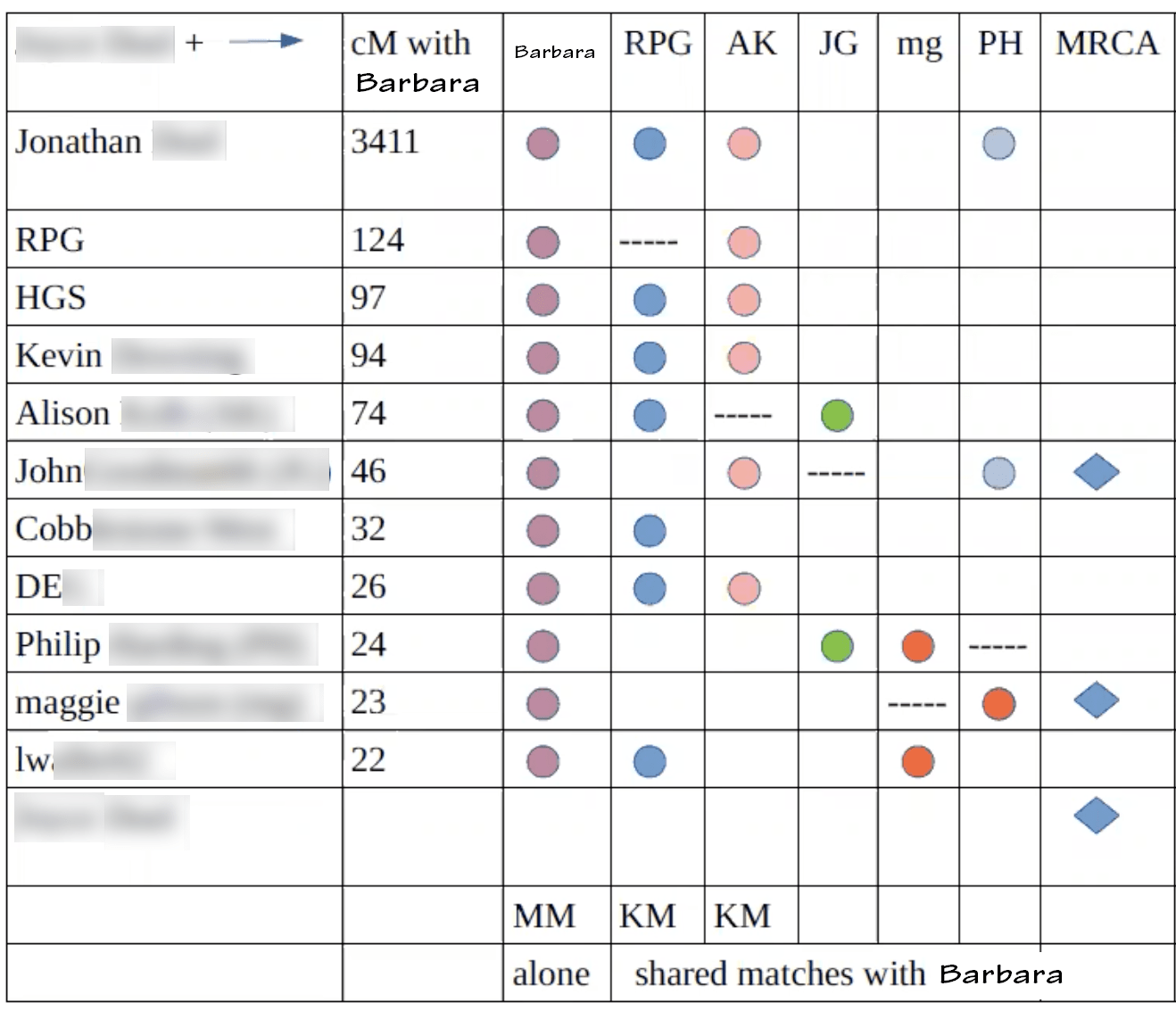 Logging everything you do becomes even more helpful when you bring someone in to look over what you’ve done. As part of the DNA Skills Workshop, Helen participated in a one-on-one meeting with Your DNA Guide founder Diahan Southard.

Diahan spotted a clue in her DNA that Helen had overlooked: a smaller-than-expected amount of DNA shared with a brother. Diahan suggested looking at the puzzle from another angle: to work out the relationships from Barbara’s point of view.

“Diahan told me that I can create networks and use dots on Barbara’s tree under my account,” says Helen. (This is because of the access Helen was granted to Barbara’s DNA test results.) “This is a game changer for me. I had been afraid to do anything like this as I feared it would mess up Barbara’s records from her perspective. Now, I can do my own trial and error and dot up a storm. Brilliant!”

(Helen’s talking about using the AncestryDNA dot system to label her matches, another tool that helps you document your research process.)

Now that she’s concluded the DNA Skills Workshop, Helen has new avenues of DNA inquiry to explore, including using the What Are the Odds? tool at DNAPainter.com. She also has a new habit that will carry her research forward with a great deal more confidence, efficiency and accuracy: documentation!

Make Your Own DNA Discoveries

Thanks Helen for sharing your story with us! Your tree has discoveries waiting to be made too, and with a little research (hopefully well documented ) you can start finding ancestors and relatives of your own. Get started by checking out our free guide, 4 Next Steps for Your DNA.

Take me to the Free Guide!