Y-DNA haplogroup E, with subgroups E1b1b and E1b1a, is the most common Y-chromosome haplogroup in Africa. Explore its deep origins, variant names (E-M2, E-M215, and E-V58), global spread to Europe and the Americas, and and consider the best YDNA test for African origins.

The genetic heritage of Africa is unfathomably deep and fascinating to explore. Haplogroup E is the most common Y-chromosome clade in Africa, and has made its way around many other parts of the world too, both anciently and also with other more modern migrations.

Before diving in, you may want to review the concepts of SNPs and Y-DNA haplogroups here. Okay? Good, now we’ll take a look at this tree. 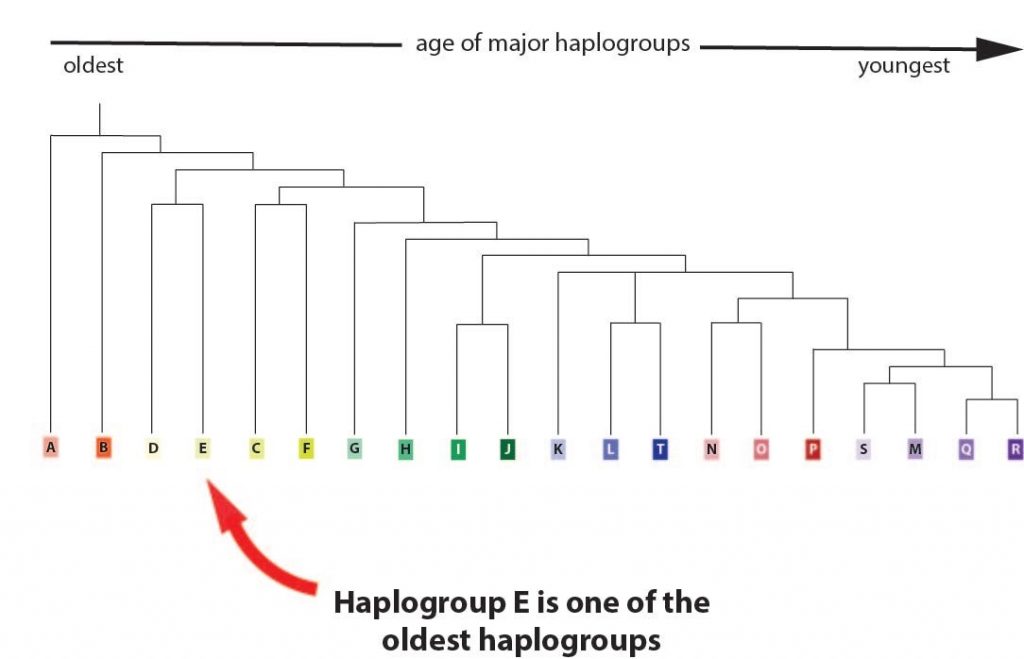 Haplogroup E is old, having emerged more than 70,000 years ago, likely in East Africa. Today descendants of this original ancient group remain highly concentrated in many regions of Africa, giving insight into the archaic movements of people on the continent. The less frequent, but long-established presence of members of haplogroup E in the Near East and Europe demonstrate other ancient migrations of the haplogroup out of the African continent. This is also the most common Y-DNA haplogroup for current-day African Americans, in both North and South America. Haplogroup E has something to say about myriads of people over vast swaths of the globe.

One of its most common subbranches, called E1b1b, is defined by the SNP E-M215, and these terms are often used synonymously. E1b1b can also be referred to by another SNP, called E-M35, which defines its major subbranch. E-M35 was discovered before E-M215, and almost all people with the E-M215 mutation also have the E-M35 mutation. The take-away is that E1b1b, E-M215 and E-M35 are often used to loosely refer to the same Y-haplogroup subbranch.

On the African continent, E-M215 is found at very high frequency in North Africa, approaching 80% prevalence in some areas across the region. In the horn of Africa, not only is E-M215 very frequent in Ethiopia and Somalia (40-80%), but a high number of different sub-variations of the group are found locally too, suggesting this area is a place of ancient origin for the group. Limited southward migration brought E-M215 to isolated populations in South Africa. And there was also spread of E-M215 westward along land and possibly maritime routes into Europe, representing the last major migration of ancient Africans into Europe.

The age of E-M215 in Europe is estimated at 10,000 years, with highest concentrations found in Kosovo (up to 45%), other Balkan nations, Greece and Southern Italy. This is a very specific genetic sub-cluster of E1b1b and from its peak frequency in Kosovo, declines steadily westward across Southern Europe. This expansion from the Balkans is the major contributing event to the presence of E-M215 in contemporary Europe. This haplogroup has a long presence in the Near East as well, as demonstrated by its occurrence in ancient remains in the Levant and mummies in Egypt. Today a significant contingent of Ashkenazi (20%) and Sephardi (30%) Jews belong to a specific sub-haplogroup of E-M215 defined by the mutation E-M123, supporting this as a major founding lineage of the Jewish people. This widespread, ancient haplogroup has made a significant imprint on the African continent and also many parts surrounding the Mediterranean. And then in far-away southern Africa, a notable satellite of E-M215 is found in The Lake Tanganyika region of Tanzania and Congo. The E1b1b haplogroup has been busy getting around for a long time!

You’ll recognize some of history’s notables that trace their paternal heritage to haplogroup E1b1b, including Italian Renaissance painter Caravaggio, the first-in-flight Wright Brothers, Albert Einstein, US President Lyndon Johnson, and the one and only Napoleon Bonaparte.

Haplogroup E1b1a is an ancient brother to E1b1b, but has left a completely different fingerprint on the world today. These branches split from one another around 47,500 years ago in the horn of Africa, followed by the emergence of prominent SNP mutation E-M2 which gained footing there. The SNP mutation that actually defines E1b1a is called E-V38, but the vast majority of its members belong to the subbranch defined by E-M2. E1b1a is often referred to by the SNP name E-M2 rather than E-V38, even though E-M2 defines its major subbranch. Historically, the terms E1b1a and E-M2 were used interchangeably for some time, because E-V38 was discovered later and E-M2 is so numerous within E1b1a. This naming convention proved hard to break, so E1b1a and E-M2 are still terms that are loosely used to refer to each other.

Today E-M2 is the most common and diversified haplogroup in West Africa (70-97%), and also has moderate prominence in Central Africa, the African Great Lakes region and South Africa (20-60%). 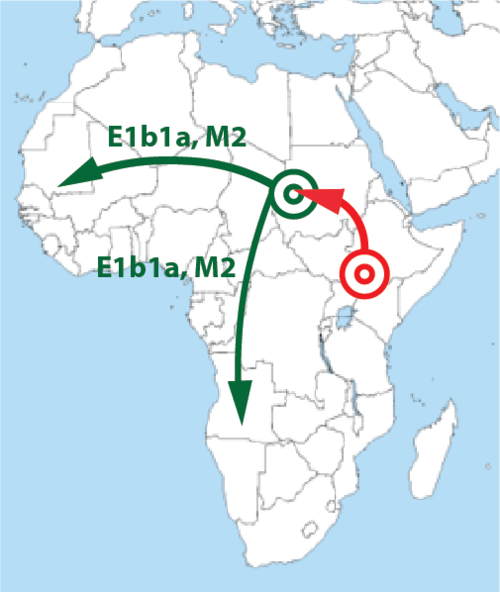 A well-recognized event called the Bantu expansion spread its language and also genetic characteristics from North Africa through an east-west corridor, and also south in two waves of migration 2,000-3,000 years ago. This movement displaced other populations’ genetic traits with the now very prominent E-M2, and arrived in South Africa as early as 300 CE. E-M2 is found in Africa outside of this main path, but with much lower prevalence in North and East Africa (1-10%).

E-M2 also moved anciently into the Middle East and Mediterranean island groups, seen today in low frequencies in some of these communities around 1-2% occurrence.

The Trans-Atlantic Slave Trade also brought E-M2 to the Americas beginning 400 years ago. With the strong predominance of this haplogroup in West Central Africa (70-97%) where the embarkments took place, many enslaved men bore the E-M2 genetic signature and brought it to different parts of the Americas.

For about 35% of African Americans who perform Y-chromosome testing, they find that their Y-chromosome is of European origin. This reflects the now better-acknowledged and brutal practices of sexual exploitation of African women by white people in the Americas. For the remaining 65% of African Americans who find an African origin for their Y-chromosomal lineage, the most common haplogroup discovered is E-M2. The total prevalence of E-M2 among males in countries in the Americas varies widely, but likely indicates paternal ancestry traced to the the Trans-Atlantic Slave Trade.

Specific subbranches of E-M2 and other completely different haplogroups of African origin are found in the Americas that can be traced to the same era of forced migration. A study in 2020 of a small establishment called Palenque near Cartegena, Colombia found four different deeply divergent African Y-chromosome lineages among the small population of current-day descendants of the slave trade. This is reflective of people arriving in the settlement who were forcibly gathered from many diverse locations in Africa, and then embarked from a multitude of different ports along the west coast of Africa. This same trend is observed throughout all of the Americas: there are some focal points of migrations from certain African populations, but this occurs against the backdrop of diversity of African Y-chromosomal lineages resulting from people being gathered from many African locations and then scattered on the new continent.

If you are considering Y-chromosome testing with an eye specific to African heritage, consider the company African Ancestry, which hosts the largest database of African Y-chromosomal and mtDNA lineages, and is 100% Black-owned. They do not provide any autosomal testing, but will trace your paternal or maternal line with specificity to 30 countries and several hundred ethnic groups, the strongest resolution available for African Y-DNA and mtDNA analysis. See their coverage of different countries and lineages within the continent. 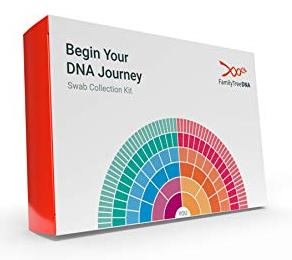 Should you take a DNA test with African Ancestry or one of the other major companies? People looking for African roots are able to receive their Y-haplogroup by testing at Family Tree DNA,* 23andMe, and Living DNA. African Ancestry provides further interpretation to inform clients of the names of specific ethnic groups and lineages to which the Y-haplogroup is likely to be related. BUT if you’re interested in working with YDNA matches–those who share your YDNA signature–you’ll need to take a YDNA test with Family Tree DNA.

Whichever company you choose to analyze your Y-DNA, you are sure to discover new insights about your family spanning millennia. It is an epic history that you are now carrying forward in your own genome. Go see what you can discover!

Should you take a YDNA test? Learn for free 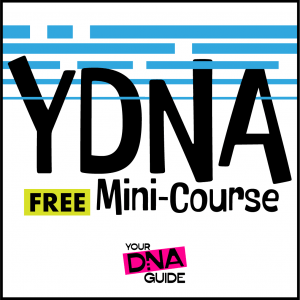 Start your YDNA journey for free! Our Why the YDNA Mini-Course will help you consider the many ways YDNA might help you answer your questions about your family history. The Mini-Course is an excerpt from our YDNA for Genealogy Course, which takes you deeper into understanding Y-haplogroups and using them in genealogy research (as well as other topics such as YDNA matching, surname project participation, and when to use Big Y).

Cool! Sign Me Up for the Free YDNA Mini-Course