Splitting genetic networks sorts your DNA match list into different sides of your family tree. See the reaction on video as this helped one researcher confirm the identity of her 3x great grandparents. Dividing genetic networks CAN help you identify your brick wall ancestors! 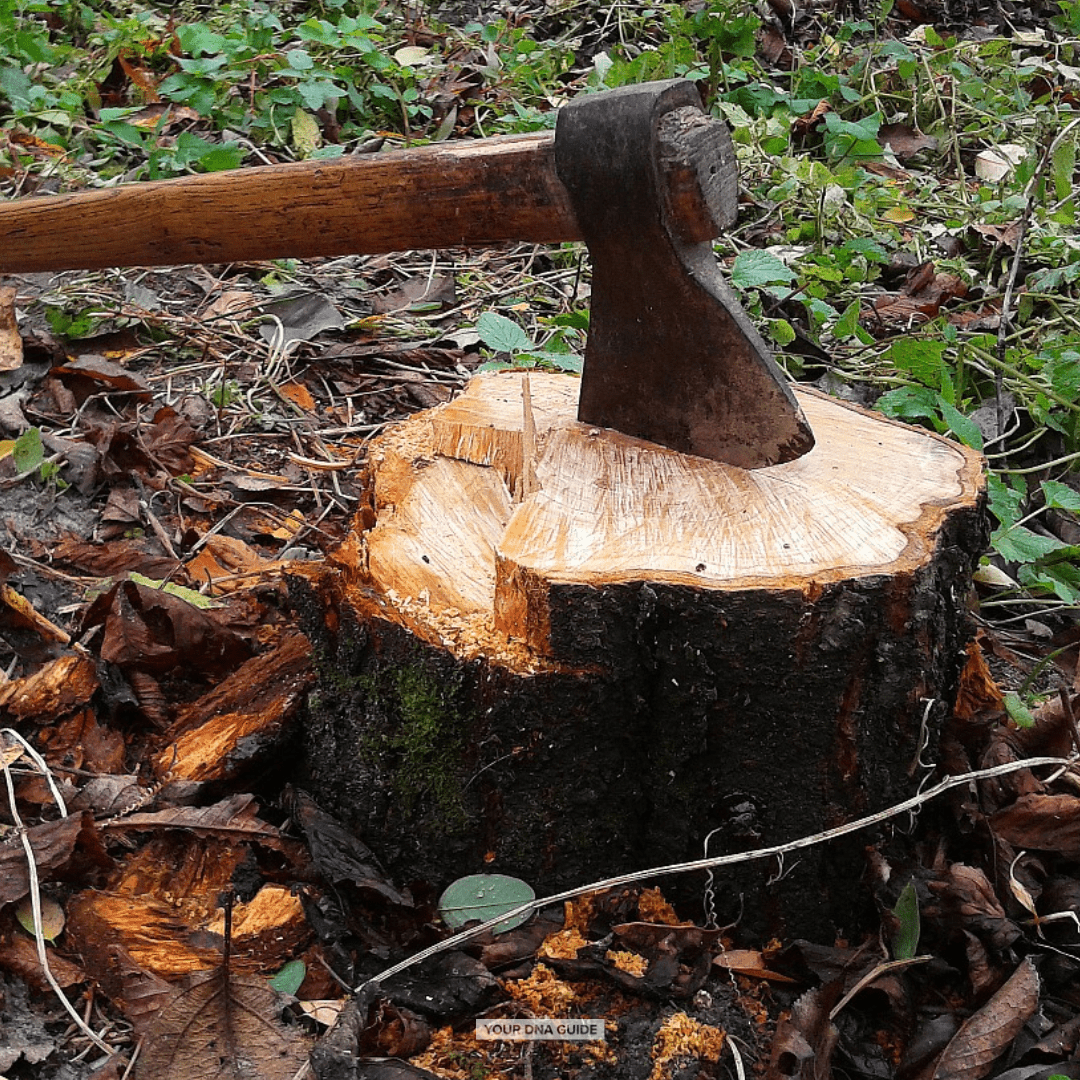 Back in the 1990s, Ruby Sharon Downs of Missouri, United States thought she had found the parents of her 2x great grandmother, Elizabeth. But Elizabeth only appeared in her presumed parents’ household as a tick mark in the 1830 and 1840 U.S. censuses (if indeed it was her). Ruby couldn’t find Elizabeth named in ANY records until the 1850 census, where she appears with Ruby’s 2x great grandfather. Family tradition and a pension application had passed down a maiden name for Elizabeth—Wininger—but she didn’t have a confident link to her parents.

Years later, it was time to add DNA testing to the mix of evidence. “I had my DNA tested everywhere but I had absolutely no idea how to use it,” says Ruby. Her goal? “To use DNA matches to prove my 20-year-old paper theory of parentage!!” 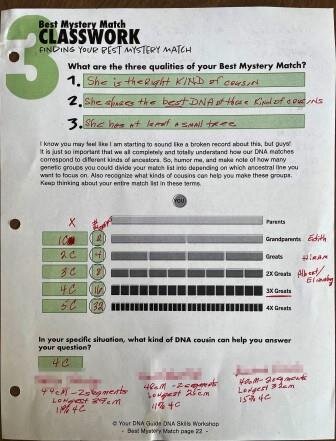 A retired social studies teacher, Ruby decided to become a student herself. She enrolled in Diahan Southard’s 6-week DNA Skills Workshop. Delighted with the hands-on workbook that comes with the Workshop, she immediately began marking up the pages with her red pen (a holdover from school days).

“I was doing well following along until there was something I simply could not get my head around,” she says. “It was ‘Splitting Your Network’.”

In theory, dividing your genetic networks sounds simple. You just divide up your DNA matches into those related to each side of a family in each generation. For your parents, this is fairly straightforward, as long as your parents aren’t related to each other and you can identify a match who belongs to one side or the other. But as you move back in time, dividing your DNA match list again for each generation, things get a little more complicated.

The DNA Skills Workshop has an entire section on dividing genetic networks. Because it’s complicated, Diahan encourages learners to watch the video tutorials, read the transcripts for them, and try the practice exercises as many times as needed.

“I watched and watched and rewatched the video [on splitting networks],”says Ruby. “I knew I could get it but whatever it was kept evading me in the same way Economics 101 had back in college. I’d read the economics assignment, know I had it, close the book and could not remember a thing!! What I finally did was print out the transcript. I could hear Diahan’s voice as I repeatedly read it out loud to myself and the cats. Finally, it clicked!!”

Ruby used Ancestry’s dot system to label her matches for each generation. When she got back to the generation of interest, she started focusing on matches whom she’d identified as belonging to Elizabeth’s side of the family. With Matches B and C shown below, she tried to extend out their family trees. “I didn’t hit pay dirt with either of them. I then settled on using [Match F] because of his ThruLine connection, a tree, and 44cM to me with 39cM longest [segment].” 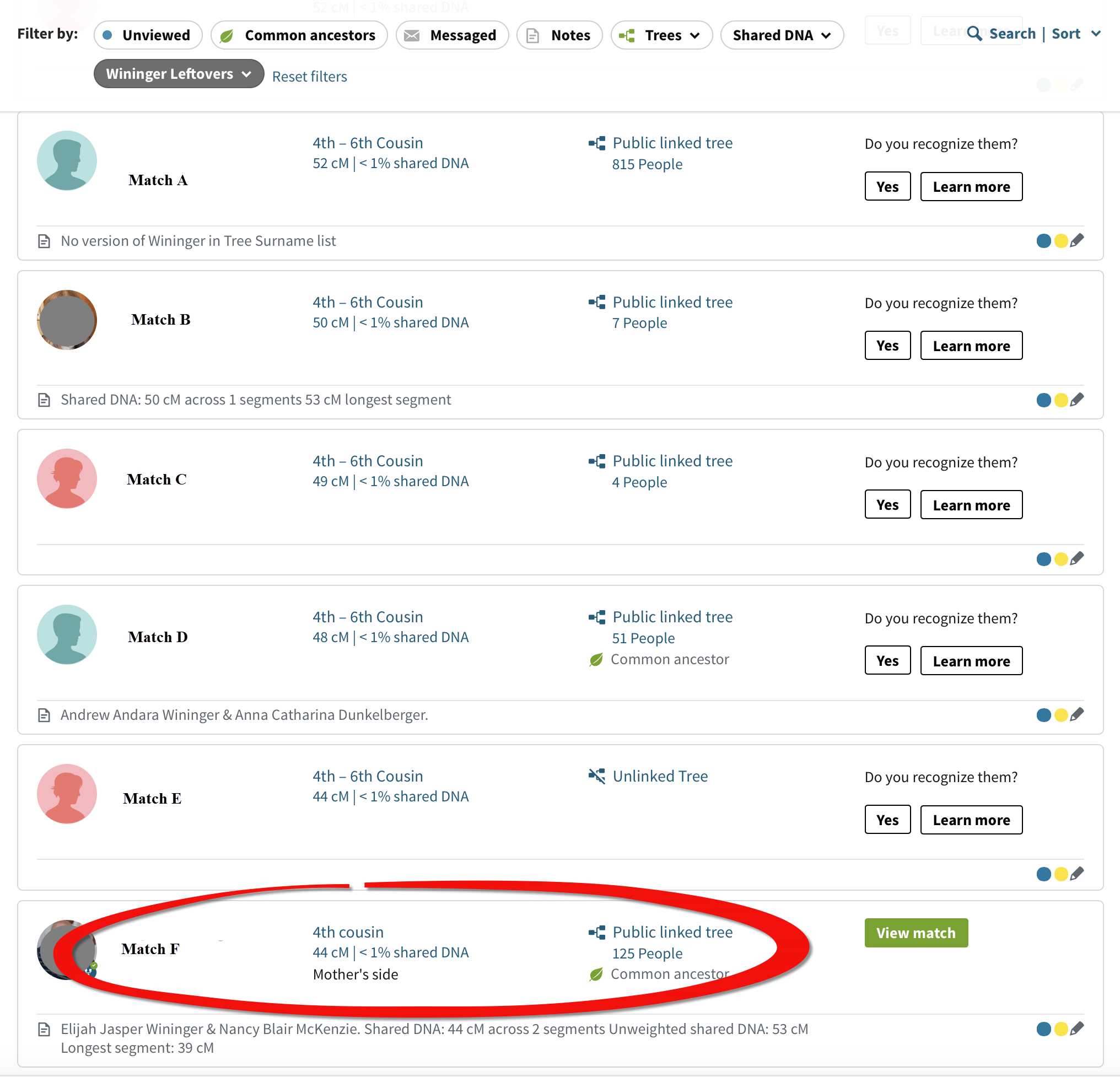 This current screenshot of Ruby’s match list includes notes she’s made since her initial discovery.

She looked more closely at the matches she shared with Match F. “Up pops a Match G who had eluded my dots before,” she explains. She took a closer look at the genealogy—both his and the tentative connections she’d made on her own side—and discovered that “he is related through a sibling of my Elizabeth Wininger!”

Ruby updated her family tree to include Elizabeth’s proposed parents, Elijah and Nancy Wininger, and her siblings. This allowed Ancestry’s ThruLines tool to map out a proposed connection to Match G and other DNA matches who show descent from Elijah and Nancy. “ThruLines shows how many share DNA connected to Elijah & Nancy Wininger and me!”

Using DNA, Ruby has answered the question that genealogy alone had failed to answer confidently. She made her breakthrough discovery during her one-on-one mentoring session that accompanies the DNA Skills Workshop. Because we record these sessions for the student’s benefit, we caught Ruby’s reaction, which she’s given us permission to share:

“This class delivered understanding on how to actually use DNA!!!!” Ruby concluded. “It’s the best money you will ever spend for DNA education. It delivers what it says it will do.”

What can DNA tell you about YOUR ancestors?

If you have an elusive ancestor that you’ve been trying to track down, we’re here to help! Get started by downloading our free guide on Finding an Ancestor with DNA!