A sudden interest in family history leads James into DNA testing—and hopes of building the tree of his immigrant ancestors back into Ireland. 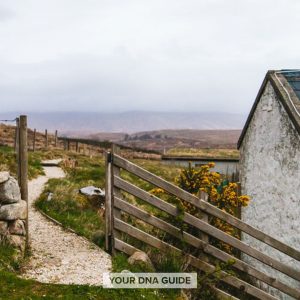 James McGrail of Steubenville, Ohio, had never taken an interest in his family history. Then about eight years ago, two things showed him just how little he knew—and it shook him.

“Growing up, family visits to Aunt Sally and Uncle Jim’s house were eagerly anticipated,” James recalls. “They were fun people to be around. Their children—my cousins—were older than me so I always looked up to them. Aunt Sally was also my godmother at baptism which made her a little bit more special than my other aunts.” 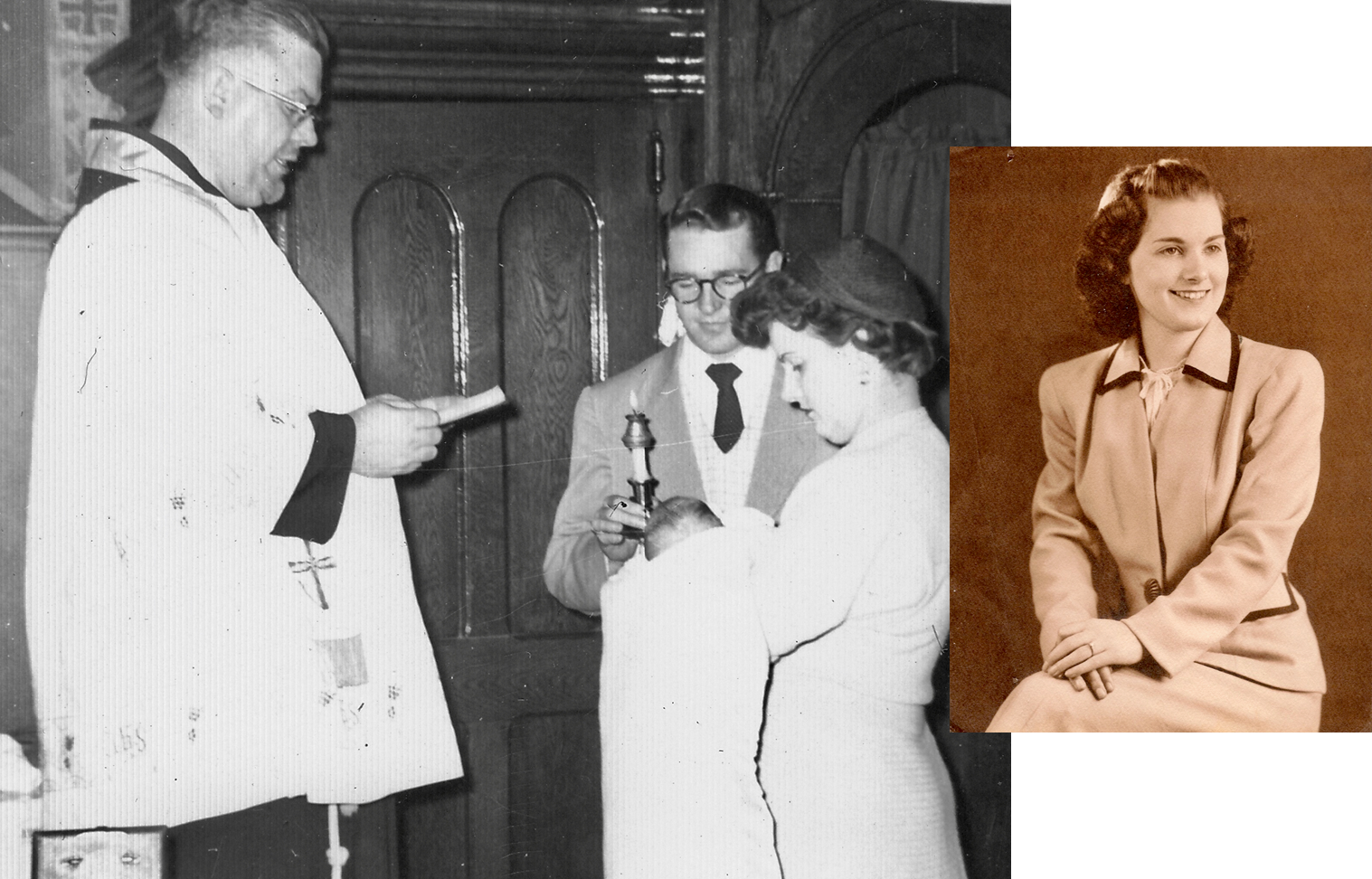 James’ baptism with godparents, including Aunt Sally; another photo of Aunt Sally.

When Aunt Sally died, James attended the funeral. “As I walked through the funeral home, there were signs to the various rooms that noted the name of the deceased,” he says. “As I passed one room, the sign noted ‘Sarah Mull.’ I thought, ‘Wow, what are the chances of two deaths with the same last name of Mull?’ My father was inside the room so I went in and asked, ‘Dad, who is Sarah Mull?’ He gave me a puzzled look and said, ‘Your Aunt Sally.’ At that moment I realized I had never heard nor knew Aunt Sally’s formal name. What else did I not know about my family?”

“About one month later my parents gave me a picture of a distinguished-looking gentleman reading a newspaper in what appeared to be a store. They explained it was my great-grandfather, Albert Beltz, who had been a tailor. The store was his tailor shop in the downtown of my hometown.” 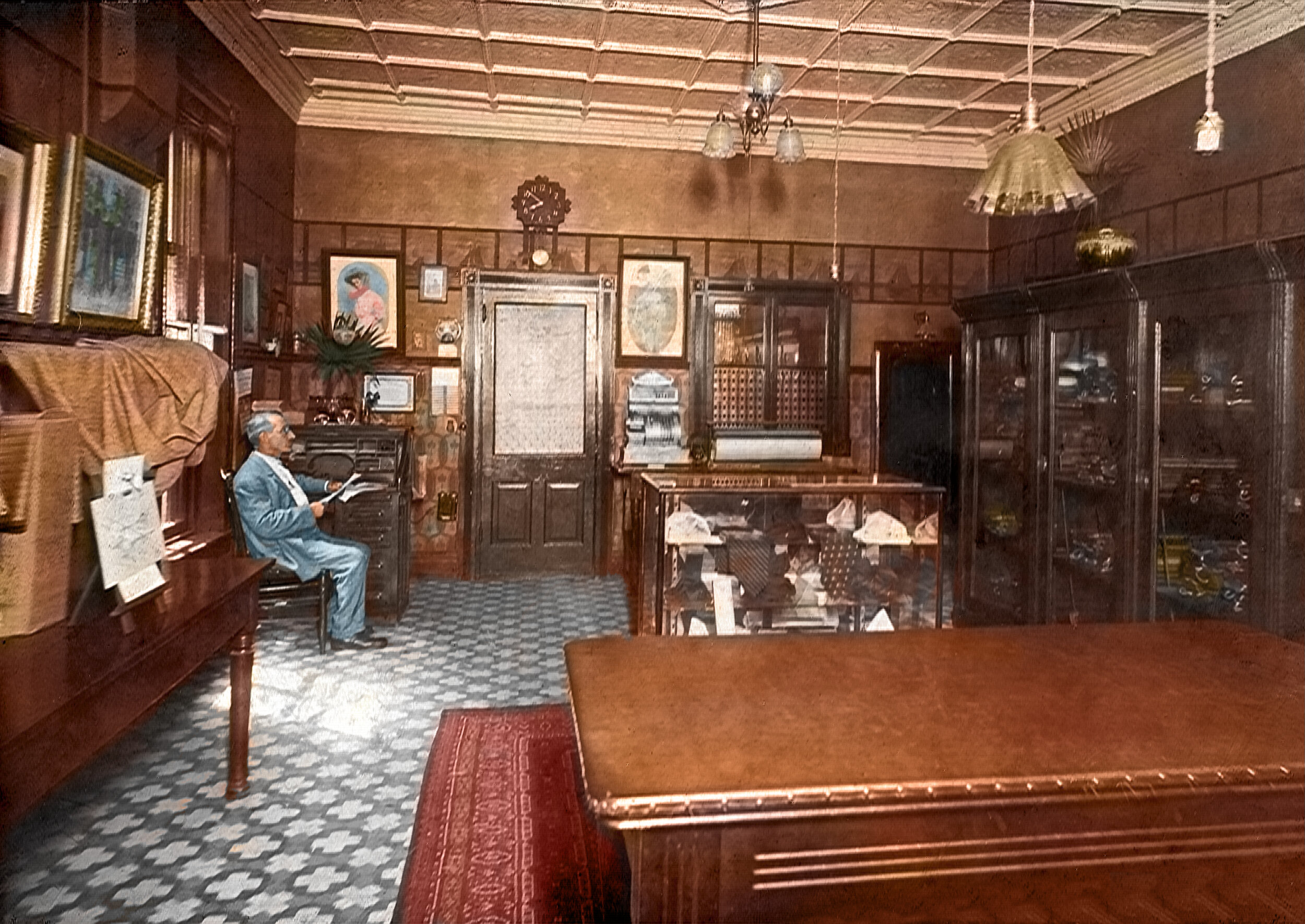 Entrance to Albert Beltz’ tailor shop, 16th Street, Wheeling, WV. “The tailor shop was on the first floor and the family lived on the second floor,” James recalls. “Albert Beltz and two of his brothers immigrated to America in 1872 via Castle Garden, New York. They all went to Wheeling, WV which had a significant German population.” The original photo was black and white. “I was never much of a fan of colorized historical photos until I saw this.”

“When I looked at his face and his shop, it immediately became more [to me] than a historical photo,” says James. “I had been given a glimpse back into time and I was looking at my great-grandfather. My heart was racing with that thought and I made up my mind that I was going to learn about my family. If I knew so little, what were the chances that my daughters and my nephew and nieces would learn our history? Our family stories had to be documented for future generations.”

“I started into DNA as a curiosity: I wanted to see if DNA would confirm the ethnicities I was seeing in my research,” continues James. “It was approaching Christmas, and I purchased a DNA kit for my wife as a gift. The results surprised her and her brothers and sisters. I was so fascinated, I convinced my mother and father—as well as my seven brothers and sisters—to test. I then started to read everything I could find regarding the science of DNA.”

“The unanticipated benefit of DNA testing was the matches. I was surprised by what I was seeing in my matches and comparing them to my father, mother and siblings,” James says. “Some matches I recognized but most I did not.”

“I started to become convinced that the matches were, at a minimum, clues—just like the documents I was hunting down and reviewing. I was concerned that I was not taking advantage of what I had available to me. I knew there had to be an approach to use the matches strategically and after several failed attempts to figure it out I knew I wanted help.”

What was dawning on James was the thing that has revolutionized DNA research for genealogists: the idea that you can use your genetic family tree to help build your genealogical family tree, and vice-versa.

James came with this question to Diahan Southard’s recent DNA Skills Workshop class. “Using best known matches to create genetic networks to then identify which of the many mystery matches to pursue has been an eye opening experience,” he says. “I have not had any breakthroughs, but I am confident I have been provided the knowledge and process that will lead to a breakthrough.”

As James is learning, sometimes significant DNA breakthroughs take a while to unravel. You may need to wait until more people test, or until key matches respond or add tree data. You may find yourself building out family trees for other matches to see how you fit together, and continuing to plug away at your own tree as you discover more genealogical information.

Make Your Own DNA Breakthroughs

Get started on your DNA learning with our free guide on next steps for your DNA. It will walk you through what you need to do to find your unknown ancestors.