“Jewish DNA” genetic signatures do show up in DNA test results for family history: in Y DNA, mtDNA and even autosomal tests. 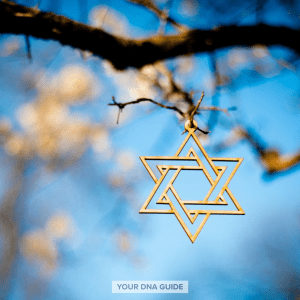 Because Jewish people (as a whole) have been so good at obeying rather strict laws of family life, their DNA hasn’t been dispersed and diluted throughout the rest of the world, but instead has maintained a relatively distinctive signature throughout time. That means that their Y DNA (tracing a direct paternal line), their mtDNA (tracing a direct maternal line), and even their autosomal DNA (looking at both sides) looks just as Jewish as beautiful, braided Challah bread.

The unique Jewish Y DNA and mtDNA signature is most easily seen in haplogroup designations. A haplogroup is a deep ancestral group that usually provides you with a broad, general idea of where your ancestors lived tens of thousands of years ago. Now for genealogists, even dealing in ten generations is a lot, let alone hundreds! However, Jewish lineages fall within a very distinct set of haplogroups (for the most part), making it very easy to verify a direct paternal or a direct maternal line as Jewish. 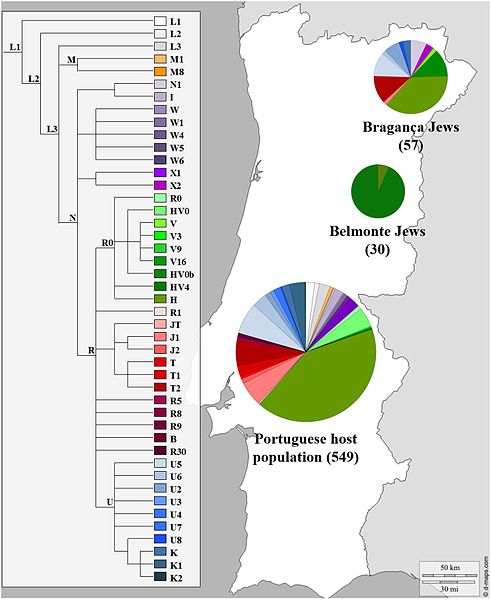 Mitochondrial (mtDNA) haplogroup distributions of the Portuguese Sephardic Jews and non-Jewish population. Sectors in pie charts are proportional to haplogroup frequency. Number of total individuals (n) are in brackets for each population. Click on image to see full citation and image source at Wikipedia.com.

The Y-DNA can even take that a step further. You see, Y DNA is reported to you as a list of values at defined locations along the Y chromosome. Every man has these same locations, what differs between men is their value at that location. When we take all of their values together the resulting Y DNA profile serves as a fingerprint of their specific paternal line. Researchers have identified a particular set of YDNA values can even be associated with the Cohen priestly line. 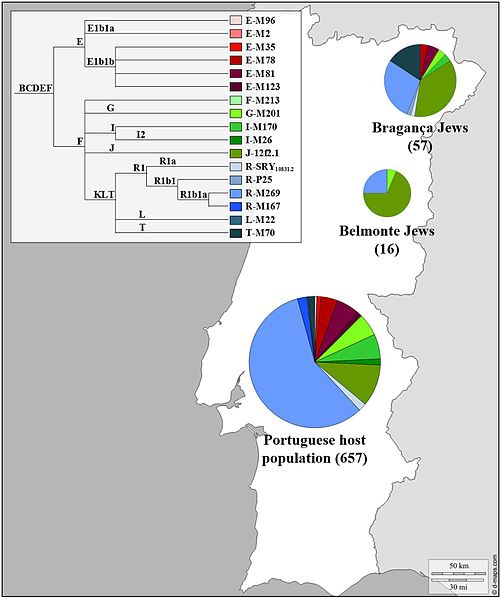 Y Chromosome haplogroup distributions of the Portuguese Sephardic Jews and non-Jewish population. Sectors in pie charts are proportional to haplogroup frequency. Number of total individuals (n) are in brackets for each population. Click on image to see full citation and image source at Wikipedia.com.

However, autosomal DNA isn’t quite so simple. Because most Jewish pedigrees involve quite a bit of intermarriage, the autosomal DNA becomes very tricky to follow. Both FTDNA and AncestryDNA try to take this into consideration when they create your match lists, but it is a difficult process. The result is that matches for most people with Jewish heritage look more closely related than they really are. The system might say that your match is your 3rd cousin, meaning you share one of your 8 great great grandparent couples in common. However, for many individuals with Jewish heritage, that 3rd cousin doesn’t share one set of 2nd great grandparents, but multiple sets of 4th great grandparents.

This endogamy, as we call it, really throws off the DNA analysis. However, the DNA testing companies are getting better and better at both choosing the kinds of DNA markers that will be the most helpful, and then analyzing the results in a way that makes sense for these kinds of endogamous populations. So if you have Jewish heritage and you embark on an autosomal DNA test, just set your expectations appropriately.

Having said that, there is also much hope and discovery going on within the Jewish community, even with these limitations. Even if the DNA is not giving us a clear picture of a specific relationship, it is helping people find cousins and connections, no matter your ethnic heritage. 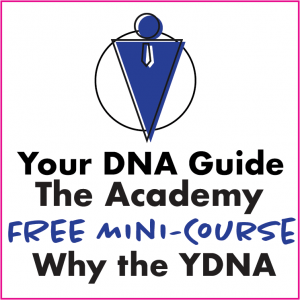 A great way to learn more about your Jewish roots is with YDNA testing. Learn more about your YDNA in our free Why the YDNA Mini-Course. Learn the many ways YDNA might help you answer your questions about your family history. The Mini-Course is an excerpt from our YDNA for Genealogy Course, which takes you deeper into understanding Y-haplogroups and using them in genealogy research (as well as other topics such as YDNA matching, surname project participation, and when to use Big Y).