Our ancient DNA provides fascinating information about our deepest human family roots—and could spark a relative’s interest in testing. Here’s what you should know about ancient DNA and genetic genealogy testing. 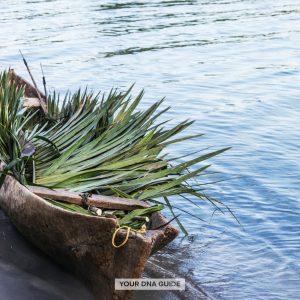 Most of our genealogy efforts focus on finding the names of family members to fill out our tree. But while some of us can go back two, three, five or even more generations, there is always going to be a point when you just can’t go any further.

While for the genealogist this might be a source of frustration and disappointment, this time period beyond genealogical time is actually an area of great interest for many non-genealogists.

Since we are always looking for ways to involve our friends and family in our family history work, getting them thinking about any ancestor, even one who will never occupy a place on your chart, is movement in the right direction. Our DNA test results provide us with connections to ancient humans (and even pre-humans) that just might spark your relative’s interest in DNA testing.

The Genographic Project DNA test initiative from the National Geographic Society is a great example of this. They aren’t considered a genetic genealogy company because they don’t give you any cousin matches, but they do provide a fantastic deep ancestry product. The Geno 2.0 DNA test kit looks at more than 300,000 DNA markers. According to the site, test results include “comprehensive analysis to identify thousands of genetic markers on your mitochondrial DNA…to reveal your direct maternal deep ancestry. In the case of men, we will also examine markers on the Y chromosome…to reveal your direct paternal deep ancestry….For all participants, we analyze a collection of more than 250,000 other ancestry-informative markers from across your entire genome to reveal the regional affiliations of your ancestry, offering insights into your ancestors who are not on a direct maternal or paternal line.”

Because the Genographic Project test can’t really help move your known genealogy forward, you will want to encourage a relative interested in this kind of information to test with either 23andMe or Family Tree DNA, which both provide details about our ancient history as well as clues to our more recent ancestral past.

23andMe reports how much Neanderthal DNA you have. Neanderthals were one of three kinds of ancient humans. It has been an ongoing goal of many scientists to determine how much, if any, interbreeding occurred between us (Homo Sapiens) and the Neanderthal. In 2010 the first Neanderthal DNA became available from ancient remains. That was compared to the human DNA, and it was found that humans actually do have DNA in common—enough to know that most humans have a direct-line Neanderthal ancestor. Now, he might be your 2,000th great grandparent, but scientists are fairly certain he is there.

At 23andMe they have identified 2,872 Neanderthal DNA markers and they tell you how many of those you have. They even report if any of those markers are associated with Neanderthal traits like back hair and height. It can be fun to compare those traits with family and friends, and hopefully then you can steer the conversation to more genealogical topics.

Again, while knowing this information may not break down any genealogical brick walls, it just might break down the wall of resistance between you and a family member who has thus far been unwilling to participate in your family research efforts. So if other tactics have failed, try interesting your family member in their ancient genetic history, with the goal of also gaining some valuable genealogical knowledge.

A new era of DNA testing

Developments in technology have revolutionized the reach of DNA testing and introduced a new era of innovation to DNA testing. This can lead to a new wave of discoveries for you too! Learn more about the potential DNA has in your family tree and how to take advantage of it with our free guide on getting started with DNA!

Originally published on September 2018 on genealogygems.com.