DNA triangulation can help you figure out how you’re related to your DNA matches or identify an unknown ancestor on your family tree. Here’s how it can help you with your shared matches and genealogy. 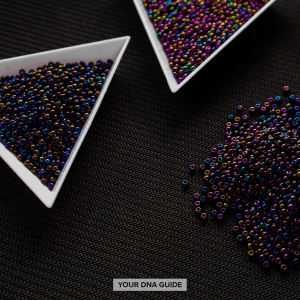 I always loved math, but not geometry. Too many complicated theorems and formulas to remember. But, as a parent, you get to go through school all over again, even the parts you didn’t really like. This second time around, I was a little more in-tune with the triangle formulas because of an ongoing conversation we have about triangulation in genetic genealogy.

However, it seems that triangles are inherently complicated, as even genealogists seem to have two different definitions about what the term means. One camp says that triangulation occurs when three or more people share the same DNA segment. Another says it is triangulation simply when three people are all sharing DNA – even if it is not on the same place in the DNA. In this article, we will be talking about the second kind, just shared DNA, without worrying about where that DNA is shared.

Triangulation in this sense is all about building a genetic network out of lots of these three-person triangles. You can do this if you’ve tested at one of the major genetic genealogy testing sites: 23andMe, AncestryDNA, Family Tree DNA or MyHeritageDNA. 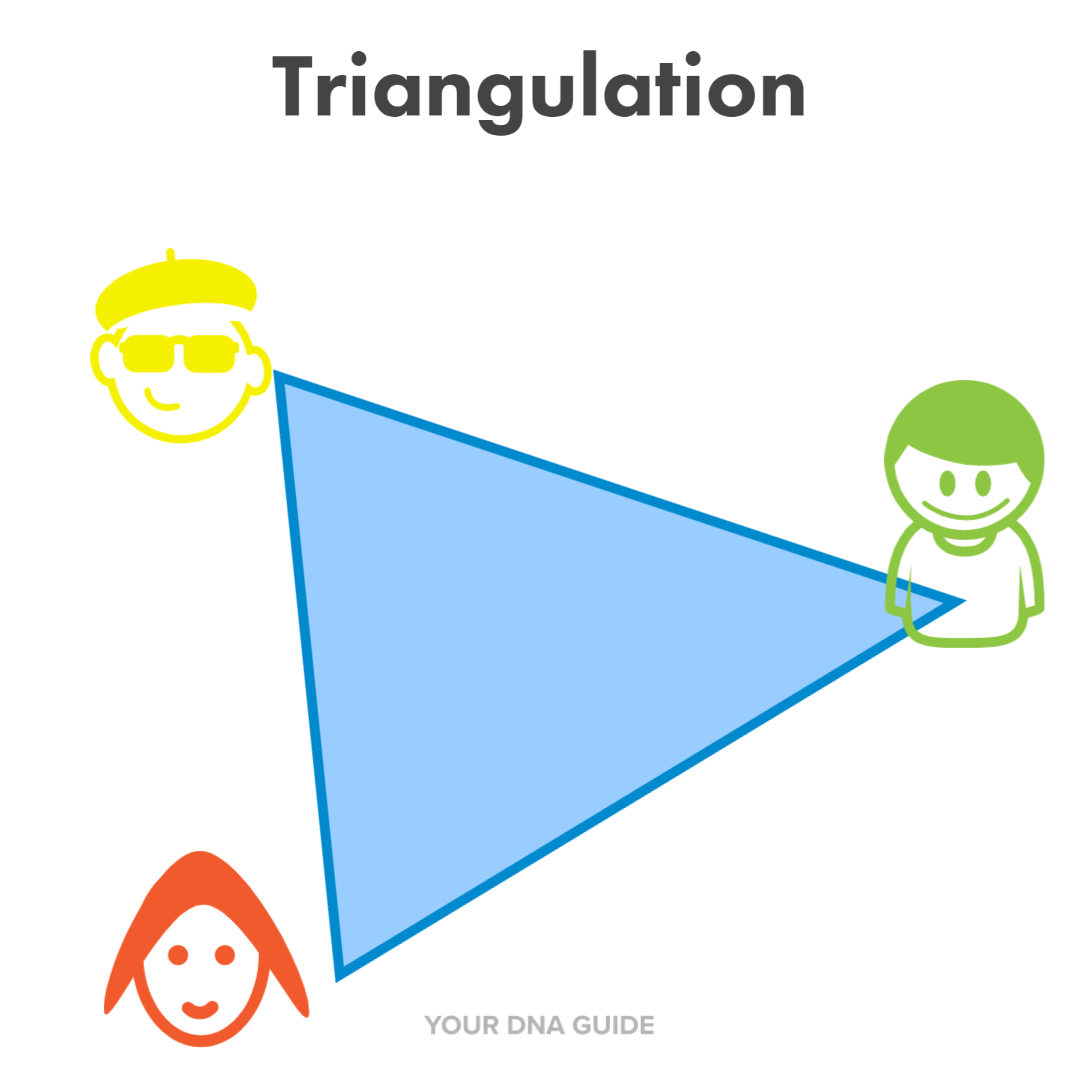 A DNA triangle has three DNA matches who are all connected to each other genetically. Think of the length of each line in this genetic triangle as your relationship to one another, as measured by your DNA testing site in centimorgans.

When most effective, your DNA triangle has two known points with a fairly short distance between them. Let’s say these two points are yourself and your second cousin Stan, who also descends from your great-grandparents, Jan and Ana Kaczynski. I like to call Stan our Best Match. The third point on your DNA triangle is anyone who is sharing DNA with both of you. Sometimes I call this person the New Match.

Find a New Match to triangulate by going to your testing site and looking for the tool that helps you identify matches you share with someone else (Stan).

What if you wanted to use triangulation to ask a different question, such as “Who are the parents of my ancestor, Richmond Claunch?” This is a question I asked myself. Richmond is my third great-grandfather on my father’s side, born in Texas in 1860. I had absolutely no clue who his parents were.

I’m fortunate to have my dad’s DNA, so I used his results as the first point in my triangle. I went looking for a second point on the triangle. It needed to be someone who connected with my dad on his Claunch side. Ideally, I want a match who descends from another of Richmond’s children (not the one through whom my dad descends). I didn’t have a known match who fit that description. So I searched my autosomal DNA matches on AncestryDNA for matches who had the Claunch surname, and then explored their trees until I found one (RS) who descends from Richmond’s daughter, Bessie. (If I hadn’t found another descendant of Richmond, I may have settled for a match who had Claunches in Texas.)

Now I had two points of the triangle: my dad and RS. I needed the third. So I used the shared matches tool to find 7 New Matches shared by my dad and RS. These all form their own triangles, as shown in the image below under Round 1 (identified as #1-#7). Remember, each of these 7 should have some kind of relationship to Richmond and his wife Lilly as their descendants, or Richmond and Lilly through their individual ancestors. 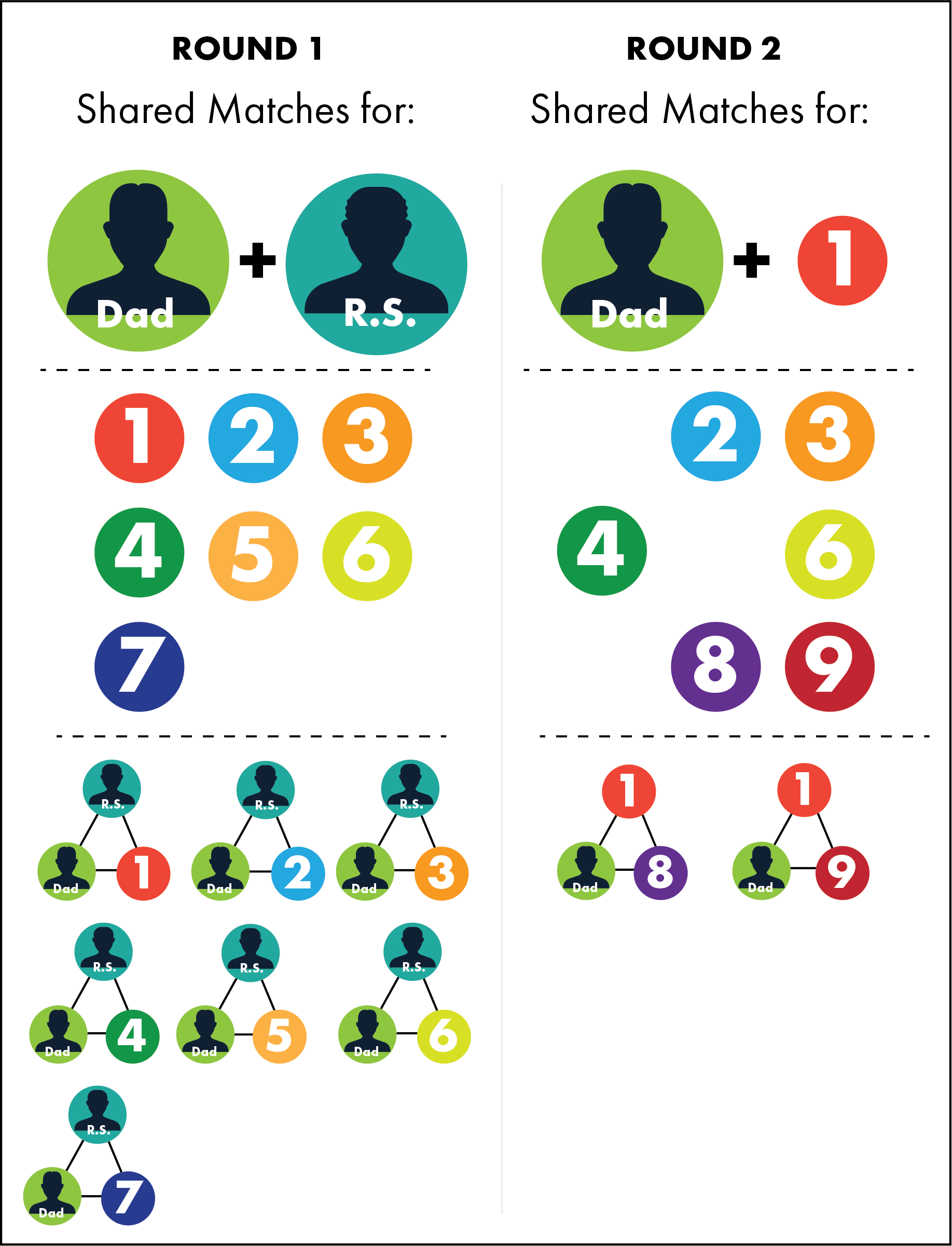 Round 2 of finding New Matches involves taking match #1, and running the shared matches tool again. Doing that finds two more matches who shared DNA with both my dad and match #1, but didn’t originally show up because they don’t share DNA with RS. Those two matches became matches #8 and #9 (under Round 2 in the image on the right). You can repeat this process for all of your New Matches, but for the sake of time and space, we are going to move forward with just these 9.

These 9 matches should fall into three groups:

We want to identify the third group of people if we hope to do research on Richmond’s line.

Even in the shared matches list between my dad and Match #1, we can see something interesting. Match#1 does NOT match #5 or #7. This likely means that #5 and #7 represent either Richmond’s line OR Lilly’s line. This theory gains strength when I realize that #5 and #7 both have Lilly’s maiden surname in their trees. I can then turn to genealogy research to confirm the theory that my dad, #5 and #7 all share ancestry on Lilly’s side.

But I won’t do that right now because I am laser focused on Richmond’s line and I’ve now identified some matches (#1, #2-4, #6, #8-9), who are likely just related to the Claunch side. These become my new priority matches to answer the question, “Who is Richmond’s father?”

Next up: it’s time to do genealogy research. I look at the online trees of these matches and try to figure out how they’re related to each other through traditional research methods. If I can find their common ancestor, I know that I am somehow related to that family as well.

Now you try it! 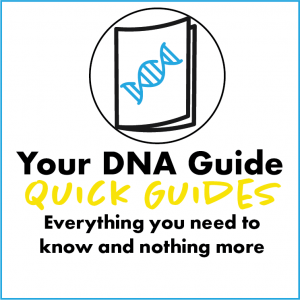 You can DO this DNA thing, and we can help you. Start with our inexpensive Finding an Ancestor Using Your DNA quick reference guide, which walks you step-by-step through the process described in the article above. You’ll be working through your connection with matches and making new discoveries in no time!